The following weapons were used in the film Joe Kidd:

Lamarr Simms (Don Stroud) carries a C96 "Broomhandle" Mauser as his weapon of choice in the film, and fits the unique holster/stock combo to the back of the grip to shoulder the pistol like a rifle. Joe Kidd (Clint Eastwood) later uses it when escaping from the bounty hunters, and shows us that in Hollywood a ten shot pistol can fire about 30 rounds and lock empty several times before actually needing to be reloaded.

Simms (Don Stroud) holds his C96 on the surviving man before killing him.

Simms (Don Stroud) pulls the slide back on his C96 to intimidate Joe but actually reveals the weapon is empty.

Joe (Clint Eastwood) fires the C96 at the bounty hunters.

As Joe Kidd (Clint Eastwood) escapes from the bounty hunters, he grabs a rifle case containing a custom built Ross Model 1910 straight pull bolt action rifle that has been sporterized and modified as a break down rifle, and fitted with a Wollensak 4x scope and micrometer mount. The gun also has a fixed five round magazine instead of the extended ten round version. Joe uses it when battling Olin Mingo (James Wainwright) in a sniper standoff.

Joe (Clint Eastwood) opens up the case containing the broken down Ross Model 1910.

Joe (Clint Eastwood) checks the scope of the Ross M10. Clint appears to be left-eye dominant, and thus fires the rifle "south-paw". There is also the chance he may be ambidextrous. Note the 28" barrel length to maximize the high velocity .280 Ross cartridge.

Joe (Clint Eastwood) loads a round into the Ross M10. The caliber is assumed to be a .280 Ross (British .280 rimless Nitro Express).

Joe (Clint Eastwood) shoulders the Ross M10. Note the P-shaped bolt, indicating it is a Ross, as does the straight pull action seen when he ejects the spent shell.

Olin Mingo (James Wainwright) carries a Remington-Keene Deluxe Sporter rifle fitted with a scope and with a shortened magazine tube as his sniper rifle in the film, noted by its external hammer mounted on the back of the bolt. Based on the muzzle diameter it appears to be chambered in .45-70. A similar rifle is seen used in The Sons of Katie Elder and Crossfire Trail. 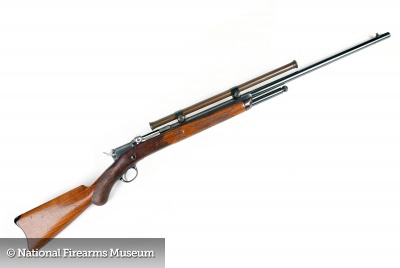 Mingo (James Wainwright) checks his Remington-Keene rifle while in the hotel room.

Mingo (James Wainwright) fires his Remington-Keene at Luis' men in the mountains.

Mingo (James Wainwright) with his Remington-Keene. Note the unusual shortened magazine tube and the Weaver B6 6x scope with Weaver 'N' mount.

"If you don't blink soon, your eye-balls 'll fall out." Mingo (James Wainwright) scans the mountains while armed with his Remington-Keene.

Mingo (James Wainwright) fires his Remington-Keene at Joe Kidd from the mountain tops. His biggest mistake was to stand out in the open and not even lay prone, which makes him an easy target, even at the range he was shooting from.

Frank Harlan (Robert Duvall) uses a Savage 99 with custom engraving as his rifle in the film. In some scenes, Roy Gannon (Paul Koslo) is seen holding it.

Harlan (Robert Duvall) with his Savage 99 in the hotel room.

Harlan (Robert Duvall) with his Savage 99 in the courthouse.

Just about all of Luis Chama's (John Saxon) men carry Winchester 1892 Saddle Ring Carbines, as do the bounty hunters in some scenes.

Luis and his men load up on weapons, including Winchester 1892 Saddle Ring Carbines, before breaking into the jailhouse.

Roy Gannon (Paul Koslo) on watch with a Winchester 1892.

One of Chama's men kills a bounty hunter with his Winchester 1892.

Chama (John Saxon) fires a Winchester 1892 from the saloon in the town.

Naco (Pepe Callahan) holds his Single Action Army on Joe in the bar.

A man in the town gives Joe back his SAA, although this isn't the safest way to do it.

Sheriff Bob Mitchell (Gregory Walcott) with a nickel plated SAA "Quickdraw" with the front sights shaved down and fitted with pearl grips. This is a professional quickdraw pistol, although his character doesn't fit this role.

At the beginning of the film when Luis Chama (John Saxon) breaks his friends out of jail, Deputy Sheriff Calvin (Clint Ritchie) is seen using a Colt Bisley Single Action Army noted by its distinct grip shape, and fitted with pearl grips. 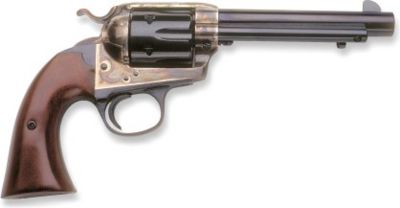 Seen in Calvin's holster is a Colt Bisley SAA.

Luis Chama (John Saxon) uses a Smith & Wesson New Model No. 3 when breaking his friends out of jail at the film's start. 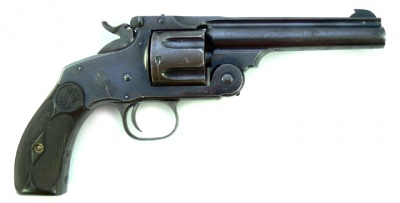 Luis with his Smith & Wesson in the courthouse.

Luis with his Smith & Wesson in the jailhouse.

A Webley Bulldog with ivory grips is carried by Helen Sanchez (Stella Garcia) in the film. Possibly the same prop is also carried by Frank Harlan (Robert Duvall) in a shoulder holster. 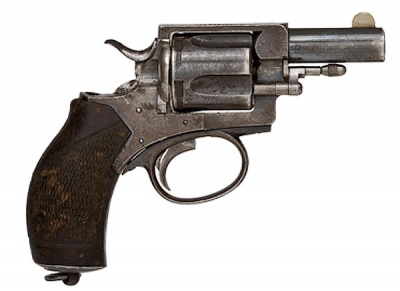 Helen is seen taking a Webley Bulldog from the weapons stash for herself.

Helen takes her Webley Bulldog before escaping with Joe.

One of Luis Chama's (John Saxon) men is seen armed with a Colt 1878 Double Action Frontier in the courthouse. 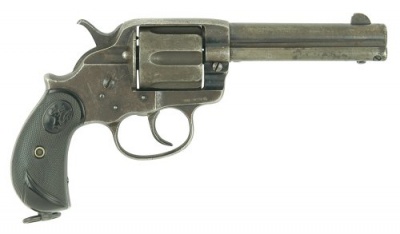 One of Luis' men with a Colt 1878 DA Frontier Revolver.

One of Chama's (John Saxon) men uses a Webley No.5 Express revolver in the courthouse. 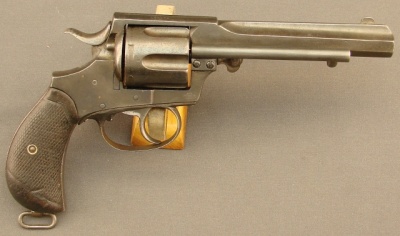 The first man with a Webley No.5

One of Chama's men with a Webley No.5

The man with the Webley No.5

Harry The Bartender (Ed Deemer) keeps a 10 Gauge Double Barreled Shotgun under the bar counter, which Joe Kidd (Clint Eastwood) uses to kill one of Luis Chama's (John Saxon) men when he tries to kill him. Joe later hands the shotgun to Harry at the end of the film and tells him to cover him from the bar. 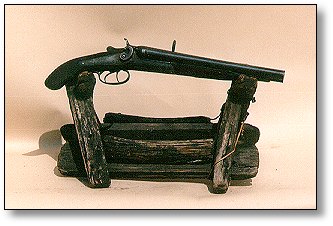 Joe (dressed like a "city dude", as they'd say back then) checks a 10 Gauge shotgun while waiting behind the bar stool.

Joe shoots one of Chama's men as he runs through the bar doors. Firing a 10 Gauge with one hand must be brutal, but not for Clint, he takes it like a champ!

Joe watches Chama leave town with the shotgun and a beer mug in hand.

Chama fires the 10 Gauge shotgun before giving it to the bartender and taking a Winchester 1892 Saddle Ring carbine.

Deputy Calvin (Clint Ritchie) is seen using a 12 Gauge Double Barreled Shotgun during the shootout in the town.

Deputy Calvin armed with a 12 Gauge shotgun while Eljay (Chuck Hayward) is using a 10 Gauge.

One of Chama's (John Saxon) men fires a Winchester 1897 shotgun from the rooftops, which injures Frank Harlan's (Robert Duvall) hand.

When the bounty hunters turn on Joe Kidd (Clint Eastwood), they disarm him but offer him to use one of the crappy guns seen on a table piled up. Most of them are not fireable and appear very old and rusted. They are likely actual guns of the period.

Among the weapons seen are a French Chassepot 1866 bolt action rifle, a Trapdoor Springfield 1873, a Remington Rolling Block, a US M1842 musket, a Smith & Wesson revolver of unknown model, and a Double Barreled Shotgun of unknown make. The rest are too obscured to identify.
Retrieved from "http://www.imfdb.org/index.php?title=Joe_Kidd&oldid=1305731"
Categories: