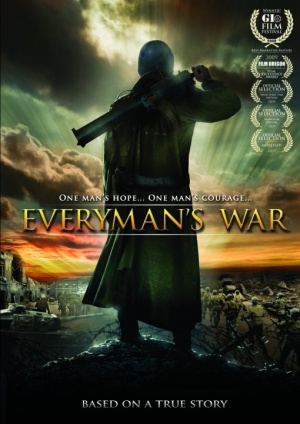 Everyman's War is a 2009 war film directed by Thad Smith. It stars Cole Carson as Don Smith, a young man drafted into the 94th Infantry Division during World War Two and sent into combat in France and Germany with a heavy machine gun section.

The following weapons were used in the film Everyman's War:

Despite being the standard-issue combat rifle for the U.S. Armed Forces during World War Two, the M1 Garand is seen scarcely throughout the film. This is historically accurate for weapons squads, such as the one depicted in the film, would normally be issued lighter weapons such as the M1 Carbine and sidearms like the M1911A1. The most notable user is Pvt. Karl Heinrich (Brian Julian), the section ammunition carrier.

A GI enters the mess tent with his M1 Garand rifle slung. Note the trench knife stuck into his pack (left side).

Heinrich jumps from the Deuce-and-a-Half truck with his M1.

Heinrich, carrying his M1, is wounded in the leg and falls to the snow.

Heinrich pours down covering fire with his M1.

S/Sgt. Don Smith (Cole Carson) hitches a ride back to M Company, resting an M1 Garand in his lap.

Smith holds his M1 on a German prisoner (Micah Klatt).

An M1 Carbine lies next to a dozing GI.

Pvt. Anthony Benedetto (Sean McGrath) with his Carbine slung as he unloads a Deuce-and-a-Half truck.

A Carbine-carrying GI moves out to the front.

German soldiers in the film use the Karabiner 98k as their main battle rifle.

A German soldier carrying a 98k.

A German soldier works the bolt on his 98k.

A German NCO carrying a 98k motions his troops forward.

A German soldier fires his 98k.

During the final battle of the film, a German soldier can be seen using a Gewehr 43 semi-automatic rifle.

A German soldier raises his Gewehr 43.

An American GI riding in a jeep carries an M1A1 Thompson.

The GI prods a German prisoner with the Thompson.

The GI holds his Thompson.

The GI fires single shots at the German soldiers.

Several German soldiers and officers use the MP40.

A German Noncom holds his MP40.

The Noncom fires his MP40.

A German sentry stands at attention with the MP40.

A German soldier carrying an MP40.

A German soldier aims his MP40.

As heavy machine gunners, the GIs of the section depicted onscreen operate a Browning M1917 in battle against the Germans.

Cpl. Starks (Mike Prosser) and Pvt. Don Smith (Cole Carson) on watch in their bunker with the Browning M1917.

A GI machine gun crew displace with their M1917.

Fuller (one hand on the trigger and the other handling the ammunition belt) fires the M1917.

Towards the end of the film, American GIs are seen with a Browning M1919A4 in a defensive position inside a townhouse.

A GI machine gun team on watch with a Browning M1919A4.

A Browning M2HB is mounted on a US Army jeep transporting Cpl. Starks (Mike Prosser) and Pvt. Don Smith (Cole Carson) to the front lines.

A Browning M2HB is mounted on a jeep.

A bipod-mounted Bren Gun is manned in a defensive position by Maurice (Nico Izambard), a member of the French Maquis.

Maurice (Nico Izambard) in his foxhole with the Bren Gun.

Several German soldiers use the MG34 light machine gun, the earlier version of the famous MG42.

A German soldier carries the MG34.

The MG42 is used by numerous German soldiers in battle.

The machine gunners pour down fire.

A German crew fire their MG42.

A German soldier carries the MG42.

An M1911A1 pistol lies on an officer's field desk.

Cpl. Smith checks the remaining ammo in his pistol.

A Walther PPK, thrown into a river by a surrendering German officer, is used by a German prisoner (Micah Klatt) to commit suicide. The weapon is a rare Political version with the Political Reich eagle on the bakelite grips. The one used in the film, is actually a "blank fire only" post war copy (with the swastika omitted), since a real model is worth thousands; presumably it is standing in for a standard issue Walther PP or PPK that a field officer might be expected to have.

The German POW (Micah Klatt) checks to see if the PPK he just recovered from the river is loaded.

The POW holds the PPK to his temple.

A F1 Hand Grenade is seen in Maurice's (Nico Izambard) foxhole and on his belt.

Maurice (Nico Izambard) with a French F1 Hand Grenade on his belt.

The Model 24 Stielhandgranate, better known as the "Potato Masher", is used by a German soldier in the climatic battle.

The Stielhandgranate comes to a rest in the snow.
Retrieved from "http://www.imfdb.org/index.php?title=Everyman%27s_War&oldid=1221580"
Categories: