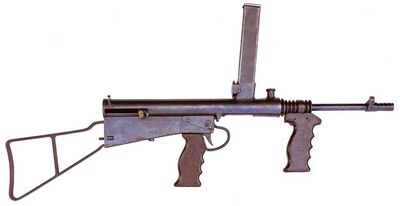 Owen Mk I - 9x19mm. This is an earlier version of the Owen gun, featuring a finned barrel, early wireframe stock (some wireframe stocks have a clip that holds an oil bottle), and solid trigger housing. The parkerized finish is a post-war refurbishment. 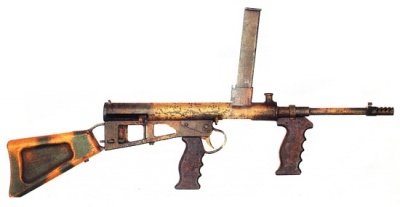 The Owen Submachine Gun was an Australian submachine gun designed by Evelyn Owen during World War II. In trials, despite much political resistance, it managed to beat the Australian variant of the Sten, and was officially adopted by the Australian army. It notably had excellent reliability, due in part to a unique receiver layout that prevented nearly all dust, dirt, sand, etc. from entering the weapon's action. It was also considered to be an excellent weapon especially suited for jungle warfare, and remained in service throughout Korea and in Vietnam.