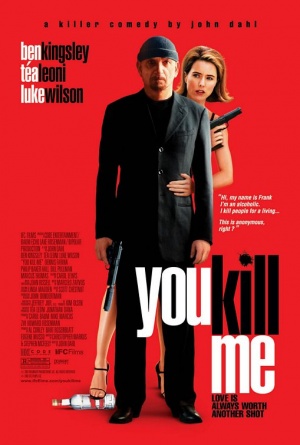 You Kill Me is a 2007 romantic comedy directed by John Dahl (Rounders, The Great Raid) starring Ben Kingsley, Téa Leoni and Luke Wilson, with Dennis Farina and Bill Pullman.

The following weapons were used in the film You Kill Me:

Frank Falenczyk (Ben Kingsley) is armed with a two-tone, suppressed Walther P99 for his hit on Edward O'Leary (Dennis Farina).

Frank screws the suppressor on his P99...

Frank has a Beretta 92FS Centurion when he is drying out in San Francisco. He hands it to his sponsor Tom (Luke Wilson) at the airport since he can't take it with him. (It's not revealed how he brought it over in the first place.) Edward O'Leary (Dennis Farina) uses one as well.

Frank cleans his Centurion. This blurry shot shows the shorter barrel of the Centurion.

Frank practices at the range with Laurel (Téa Leoni).

Frank intimidates a city official with his Centurion.

Edward O'Leary with his Centurion.

Roman Krzeminski (Philip Baker Hall) is initially armed with a Glock 17, but he gives it to his son Stefan (Marcus Thomas) in exchange for his Remington 870. Some of O'Leary's henchmen carry them as well. Laurel Pearson (Téa Leoni) takes one off of a henchman.

One of O'Leary's henchmen holds a Glock on Henry (Devin McCracken).

Stefan Krzeminski with the Glock.

O'Leary's henchman James Doyle (Scott Heindl) carries an M1911A1, but Laurel later takes it away from him. Frank hands his spare M1911A1 to Stefan when they are hiding out in his house.

Stefan picks up his M1911A1 when he hears someone at the door.

Doyle attaches a suppressor onto his M1911A1.

Stefan is armed with a Remington 870 Marine Magnum, but gives it to his father Roman in exchange for his Glock 17.

Stefan picks up the Remington 870. The Remington script can be seen on the left side of the receiver.

Roman with the Remington 870.

James Doyle tries to snipe a target with a Browning BLR.

Roman uses what appears to be a suppressed Walther PPK for his last hit.

One of O'Leary's henchmen is armed with an unknown Smith & Wesson pistol. This is the only shot of it in the film.

Aside from the slide-mounted safety, there's not much else to go on.
Retrieved from "https://www.imfdb.org/index.php?title=You_Kill_Me&oldid=720904"
Categories: