Year of the Dragon

The following weapons were used in the film Year of the Dragon:

When Ronnie Chang (Joey Chin) fails to strangle Stanley White in his home. Stanley White (Mickey Rourke) grabs a Desert Eagle Mark I .357 out of his living room cabinet and uses it when Ronnie tries to flee. Stanley uses it again in his final shootout with Joey Tai (John Lone). This is the first use of the Desert Eagle in a film.

Stanley fires his Desert Eagle at Ronnie as he tries to flee.

Stanley threatens Joey to find out where the heroin is.

The main sidearm of Capt. Stanley White (Mickey Rourke) is a Colt Detective Special. He uses it through most of the film and is carried in a shoulder holster.

Stanley fires his Colt at the Pei Brothers.

Clear shot of his Colt.

Stanley fires his Colt while the Pei Brothers flee. While his eyes are mostly covered up. The gun sight is at eye level.

After refusing to pay protection and insulting him, Lenny Carranza (Tony Lip) is killed by Ronnie Chang (Joey Chin) with a Beretta Cheetah.

Close up of the Cheetah.

New recruits along with Herbert Kwong (Dennis Dun) are seen qualifying with the Smith & Wesson Model 10.

Another qualifying with the Smith & Wesson Model 10.

Herbert with a Model 10.

Highlight for Spoilers: Herbert is not a very good shot. Not enough trigger time. Stanley White (Rourke) is told by his superiors that Herbert doesn't have enough training. But Stanley needed someone undercover ASAP, so Herbert did with minimal training which may have cost him his life.

One of the new recruits is seen qualifying with a Smith & Wesson Model 10 Heavy Barrel.

New recruit with a Model 10HB.

A new gang member is forced to shoot the Pei Brothers with a Browning Hi-Power fitted with a suppressor.

Gang member with the Hi-Power.

The Hi-Power aimed on one of the Pei Brothers.

Highlight for Spoilers: As retribution for the death of Herbert Kwong (Dennis Dun), Stanley White finds Joey Tai (John Lone) in a nightclub, where he takes him to a bathroom stall and beats him. Red Hair (Doreen Chan) and Aileen (?) draw Walther PPK's on Stanley and his partner Angelo Rizzo (Leonard Termo). Joey Tai (John Lone) uses what appears to be a gold plated PPK in the final shootout with Stanley White.

Aileen fires her PPK, which wounds Rizzo in the stomach.

Red Hair lying on the street with her PPK. Note that the slide is locked back.

Best view of the PPK. Slide is forward. 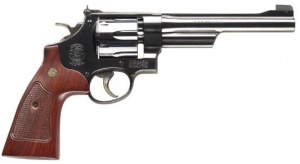 Joey Tai aims the S&W 27 on the old General. Notice how the soldier on the right gets out of the would be bullet path.

When Angleo Rizzo (Leonard Termo) is shot by Aileen with her PPK, Rizzo's revolver is seen holstered.

One of the Pei Brothers reloading. Note the spare magazine is clipped with a bracket at a right angle to the other. This configuration, originally conceived of by Israeli Special Forces soldiers, not only facilitates a rapid magazine change, but adds a small amount of additional weight facing forward, helping to control muzzle rise. When the first magazine is empty and the full one is flipped upward and into the magazine well, the empty magazine extends backward, parallel to the arm and out of the way.

After a failed attempt to assassinate Stanley White, Ronnie Chang (Joey Chin) draws a Micro Uzi before trying to flee.

Ronnie fires a Micro Uzi at Stanley. Using the folding stock as a fore-grip.

Better view of the Micro Uzi, while Ronnie tries to flee.

After hearing gunshots down the street from Stanley's house. Louis Bukowski (Raymond J. Barry) carries a Winchester Model 1897 when trying to find out what's going on.

Louis Bukowski with his Model 1897.

When Joey Tai goes to Thailand, most of Gen. Ban Sung (Yukio Yamamoto) soldiers are armed with M16A1's.

Soldiers on the left with M16A1's.

A soldier on horseback is seen with a SKS, while escorting Joey Tai to the General.

Soldier behind Joey with a SKS.

Best view of the SKS.

A few of the Generals soldiers are armed with Heckler & Koch HK33A3.

Soldiers in the center with their HK33A3's

Gen. Ban Sung (Yamamoto) handles a Type 56-1 while discussing kilo prices with Joey Tai. Gen. Ban Sung calls the Kalashnikov the best rifle ever made, despite most of his men being armed with M16A1's. One soldier is seen with a milled receiver Type 56-1 when Joey Tai is given a S&W 27 to shoot the old General (Harry Yip).

Gen. Ban Sung : A Kalashnikov! Best rifle ever made. The Russians used to give them to us to fight the Burmese. But now it's harder to get. They want dollars. Everybody wants dollars.