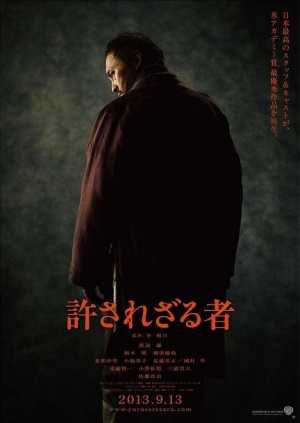 Unforgiven (Japanese title: Yurusarezaru Mono) is the 2013 Japanese language feature film remake of the 1992 Clint Eastwood Western of the same name. The setting of the remake moves to the late 19th century Japan shortly after the start of the Meiji Era and stars Ken Watanabe as Jubei Kamata, a former samurai with a reputation of being a brutal killer who is asked by a former associate to accept a bounty to kill the men who attacked and disfigured a prostitute.

The following weapons were used in the film Unforgiven (2013):

A Smith & Wesson Model 2 revolver is seen being pulled out .

A Smith & Wesson Model 2 revolver is seen being pulled out in the center.

The Winchester Model 1892 Saddle Ring Carbine is the weapon of choice for both Jubei Kamata (Ken Watanabe) and Kingo Baba (Akira Emoto).

Jubei Kamata (Ken Watanabe) holds the rifle during a confrontation.

The rifle is aimed by Kingo Baba (Akira Emoto).

The men who are engaged are armed with Tanegashima muskets. Goro inaccurately refers to these weapons in the film as "flintlocks," when they are actually matchlock guns.

The soldiers who accompany are armed with Enfield 1853 rifles.

The rifles are held by the soldiers.
Retrieved from "https://www.imfdb.org/index.php?title=Unforgiven_(2013)&oldid=1292775"
Categories: