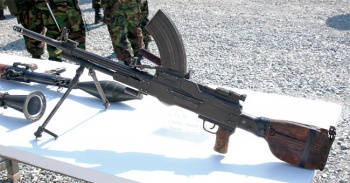 The Type 73 is a light machine gun, designed and manufactured by North Korea's First Machine Industry Bureau for use by the Korean People's Army. The machine gun is mostly based on the Soviet PK but incorporates dual magazine/belt feed system, patterned after the Czechoslovak Vz.52. The feature, most unusual for machine guns, is a barrel attachment for firing rifle grenades.

The Type 73 is main squad automatic weapon of the Korean People's Army. It was also supplied to Iran and to various non-government powers on Middle East.

The Type 73 Light Machine Gun and variants can be seen in the following films, television series, video games, and anime used by the following actors: