Two Long Hoots in the Fog (Dva dolgikh gudka v tumane) is a Soviet 1981 (filmed 1980) adventure detective movie directed by Valeriy Rodchenko. Somewhere in the north regions of the USSR a hydroplane transports a large sum of cash. Due to technical problems it has to land of a river, but a sudden storm throws far away the hydroplane without its crew. An unknown person comes across the plane. He takes the money and kills a geologist who becomes a witness. Later a river vessel Anadyr comes into heavy fog and has to anchor on the river. Suddenly a passenger of the vessel is found murdered. So the shipmaster has to become a detective.

The following weapons were used in the film Two Long Hoots in the Fog (Dva dolgikh gudka v tumane):

Dagoyev holds his pistol before landing.

Dagoyev assembles the pistol after cleaning.

Dagoyev holds his TT in the scene in hunter's house.

A closeup of the TT.

Dagoyev fires at the criminal.

A Mosin Nagant M1938 Carbine is used by several crewmembers of Anadyr, including chief mate Tooming (Peeter Urbla), and also by a member of geologists group Ivan Chizh (Aleksandr Susnin).

Tooming finds out that there are only two cartriges for the carbine.

Tooming loads the carbine. The empty stripper clip is seen in his hand.

Tooming holds the carbine during the landing.

The carbine is seen in hands of a sailor (Vladimir Shavarin) behind the shipmaster (at the right).

The boatswain of Anadyr (uncredited) holds the carbine at the left.

A sailor (Vladimir Dyatlov) at the left with a shotgun.

The same character carries a shotgun at the right.

A Single Barreled Shotgun is seen in one scene. 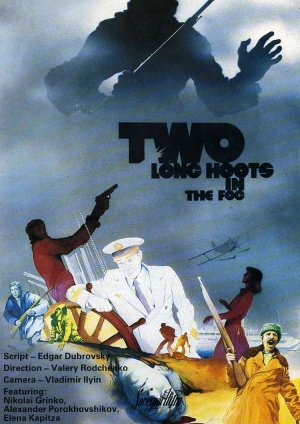