To the Ends of the World (Les confins du monde)

To the Ends of the World (Les confins du monde) is a French 2018 war drama directed by Guillaume Nicloux. The story is set in Indochina in 1945. In March 1945 a French garrison is massacred by Japanese forces, and Robert Tassen (Gaspard Ulliel) is the only survivor among soldiers and civilians while his brother is among the dead. In Autumn 1945 Tassen is in charge of a unit composed of Viet Minh defectors.

The following weapons were used in the film To the Ends of the World (Les confins du monde): 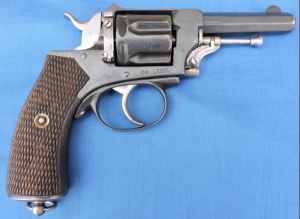 Tassen threatens to kill a blind Vietnamese girl while interrogating her father about Viet Minh partisans.

A close view of Tassen's revolver.

Tassen (at the left) carries the revolver tucked in his belt. The grip is seen.

A view of Tassen's revolver from another side.

Tassen shoots one of his men for committing a rape.

A Japanese officer fires at dead and wounded French in a mass grave. His pistol generally resembles a Nambu Type 14 but seems to be more angular, like Webley & Scott Mk I.

Lt. Maussier with a MAS-38. He also has a pistol holster on his belt but it seems to be flat and empty.

Robert Tassen (Gaspard Ulliel) carries an M1 Carbine in several scenes. His carbine has adjustable rear sight and bayonet lug. This version appeared only in late 1945 and fits the time when the plot is set.

Tassen with the M1 Carbine.

A soldier at the right carries an Mle 1892 carbine.

The stock and bolt are seen.

One of Vietnamese soldiers of French colonial troops carries a Berthier Mle 1916 Carbine.

A soldier holds an Mle 1916 carbine. The protruding 5-round magazine is seen.

Mle 1916 carbine is seen at the left. Other soldiers are armed with MAS-36 rifles.

A Viet Minh partisan fires a Lee-Enfield rifle at Tassen during the jungle raid of Lt. Maussier's unit.

Another partisan fires a Lee-Enfield.

A rifle next to the dead partisan.

A Lee-Enfield is confiscated from the old Vietnamese.

Tassen with the captured Lee-Enfield.

A Hotchkiss M1914 is seen on a watchtower.