Tickle Me is an American 1965 musical Western comedy directed by Norman Taurog and starring Elvis Presley as a champion rodeo rider Lonnie Beale. Until the season starts up again, Lonnie finds a job at a guest ranch. Then he follows Pam Meritt (Jocelyn Lane) to the ghost town of Silverado, where one of Pam's relatives has hidden a treasure in the days of Old West. But they are not the only ones who want to get the treasure.

The following weapons were used in the film Tickle Me:

When Lonnie Beale (Elvis Presley) imagine himself as a gunslinger Panhandle Kid of Silverado, he carries a pair of Single Action Army Civilian model revolvers with nickel finish and pearl grips. In same scene a Single Action Army revolver is also seen in holster of gambler Harry (Lonnie imagines his rival Brad Bentley (Edward Faulkner) as this character). Treasure hunter Jerry-Gardener (Louie Elias) carries a pair of SAA revolvers when he pretends to be a mannequin of a highwayman.

He shows his marksmanship, firing at a silver dollar and splitting it into a handful of quarters and dimes.

Harry also carries a Single Action Army, but the barrel isn't seen, and the exact model cannot be identified. His revolver is blued, with staghorn grips.

Jerry-Gardener carries a pair of SAA revolvers (blued with wooden grips, and again of unclear model), but he prefers knifes when threatening Lonnie. 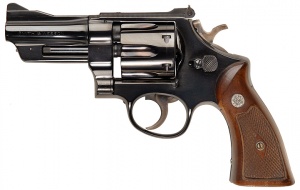 The grip of Sturdivant's holstered revolver is seen.

Sturdivant holds his revolver in the night scene.

Sturdivant raises his revolver on Lonnie and his friends.

Lonnie (Elvis Presley) with the revolver, taken from defeated Sturdivant.

In the scene in Old West saloon that happens in Lonnie's imagination gambler Harry carries a Remington 1866 Derringer in his sleeve (an iconic feature of cardsharps in Western movies).

A derringer on Harry's palm.

One of the treasure hunters carries a nickel plated M1911 with pearl grips. As the guns of other members of the gang are known (Sturdivant carries a Smith & Wesson, Jerry-Gardener has a pair of SAA revolvers, and Adolph (John Dennis) has a blued M1911A1 (see below)), this pistol most likely belongs to the fourth member of the gang, Henry-Gardener (Bob Hoy). 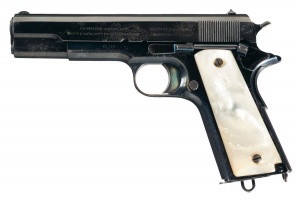 Masked Adolph threatens Lonnie and Pam. The shape of the hammer spur allows to idenfify this pistol as M1911A1 rather than original M1911.

Another view of Adolph's pistol.
Retrieved from "https://www.imfdb.org/index.php?title=Tickle_Me&oldid=1508757"
Categories: