From Internet Movie Firearms Database - Guns in Movies, TV and Video Games
(Redirected from The Usual Suspects)
Jump to navigation Jump to search 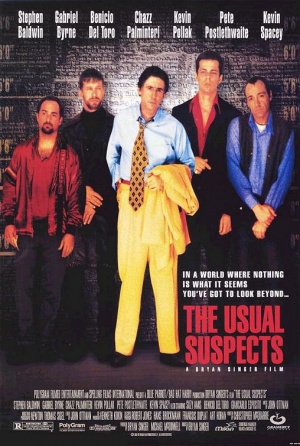 The following weapons were used in the film The Usual Suspects:

The Browning Hi-Power Mk. III is the unofficial star of The Usual Suspects. Nearly every handgun depicted in the film is either a Mk. III or original Browning Hi-Power. All of the main cast use one at some point in the film, though McManus (Stephen Baldwin) definitely has the most memorable scenes with it. McManus has a sound suppressor fixed to his when the group confronts Kobayashi about the job they received. He amazingly kills two men in a half a second when he is in the elevator shaft. 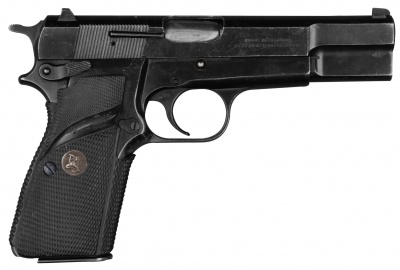 Commercial Browning Hi-Power Mark III - 9mm. This is the screen-used firearm carried by Stephen Baldwin in the film The Usual Suspects. Thanks to James Georgopoulos.

McManus breaking through the front window of an NYPD cruiser with his fist and a Browning Hi-Power Mk. III. Fenster's Mossberg 500 Mariner is visible in the background.

McManus about to fire a brace of Hi-Powers, killing two bodyguards in a single moment. This is a continuity error, as a SIG was kicked to McManus.

Verbal and Hockney threatening Redfoot's hooligans with their sidearms. Hockney has adopted his typical gangster pose.

Fenster (Benicio del Toro) pulls his Browning during the confrontatio with Redfoot.

McManus attaches a sound suppressor to his Browning Hi-Power before climbing atop an elevator.

The SIG-Sauer P228 makes a brief appearance in the film, as it pulled by the companion of Saul Berg (Carl Bressler) the heroin dealer, who is reluctant to part with his product. The SIG is seen being kicked away to McManus, but in a continuity error, McManus is seen picking up another Browning HP. Verbal Kint (Kevin Spacey) eventually settles the dispute with his Hi-Power.

SIG-Sauer P228 about to be dropped by Saul Berg, a cocaine dealer. Also visible is Keaton's Hi-Power.

A Smith & Wesson Model M&P Revolver is used by a younger "Keyser Soze" (Scott B Morgan) in a flashback.

In a flashback, Keyser Soze firing his revolver at a Hungarian.

Keyser Soze firing his revolver in another shot.

In the story told by Kint, a nervous Hungarian threatening Keyser Soze's child with what appears to be a Tokarev TT-33.

What appears to be a Tokarev semi-automatic pistol being used by a Hungarian thug as Kint tells the story.

A Smith & Wesson 6906 is used during the climactic Hungarian Ship sequence near the end of the film. During an explanation of the events, the pistol is seen in the hands of different characters, depending on whose version of the story is being shown. The handgun is shown wielded by Dean Keaton (Gabriel Byrne) when Customs Agent Kujan (Chazz Palminteri) hypothesizes that Keaton is the legendary "Keyser Soze". When Verbal Kint (Kevin Spacey) relates the tale, an unseen figure portraying Keyser Soze uses it to shoot Keaton (Gabriel Byrne). A Smith & Wesson 6906 is seen again, used by a man guarding the Hungarian's Informant.

"Keyser Soze", in one version of the events, is seen executing Keaton (Gabriel Byrne) with his Smith & Wesson 6906 pistol - 9mm

A guard speaking to the Hungarian informant is holding a Smith & Wesson 6906.

The submachine gun used by several members of the robbery crew is the Heckler & Koch HK94A3 collapsing stock civilian guns with 16" barrels chopped and converted to resemble MP5A3s and fitted with Surefire light dedicated forends. They can be noted as HK94s instead of MP5A3s because of the lack of barrel lugs, a push-pin set and the lack of a paddle magazine release behind the magazine. The weapon appears throughout the climactic final battle of the film, in the hands of McManus (Stephen Baldwin), Hockney (Kevin Pollak), and Verbal (Kevin Spacey). Hockney bluffs his way past a guard using one, and extends his stock to fire. McManus primarily fires his from the hip, whereas Verbal never uses his at all.

Hockney (Kevin Pollak) spraying down the superstructure of a tanker with his HK94A3 fitted with Surefire light dedicated forend.

Many of the Hungarians besieged on their ship carry a variety of interesting firearms, including what appear to be a selection of Steyr SPPs. 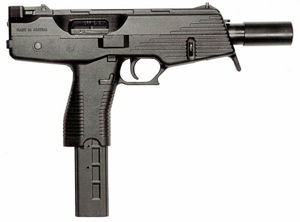 What appears to be a Steyr SPP being used by Hungarian thugs.

Verbal Kint (Kevin Spacey) uses a IMI Uzi to intimidate the "NYPD's Finest Taxi Service" from the bed of a van during the group's first heist.

McManus (Stephen Baldwin) uses a Steyr HBAR-T(the "T" in the name is indicative of the fact the standard 1.5x scope has been removed and a scope mount, allowing the use of higher powered optics, has been put in its place), which is the designated marksman version of the standard AUG, to assist Keaton (Gabriel Byrne) in killing several Hungarian sailors standing on the docks near a doomed vessel.

McManus unfolding the bipod on his Steyr HBAR-T.

Thugs employed by Redfoot (Peter Greene) all carry Ruger Mini-14s. These rifles only appear in defense of Redfoot when he and Keaton (Gabriel Byrne) and his crew almost come to blows.

Ruger Mini-14 with optics and a folding stock in the hands of Redfoot's thugs.

Hockney (Kevin Pollak) uses a cut-down Rossi Overland Shotgun to threaten uniformed NYPD officers early in the film, and the gun is not seen again. 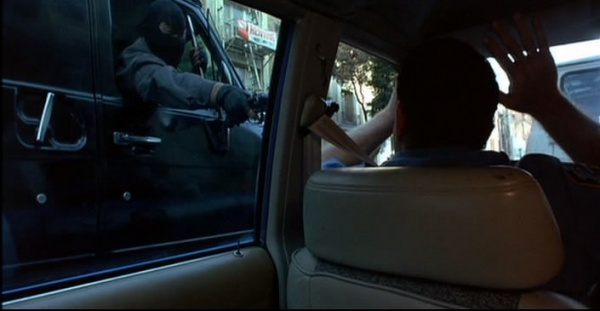 Hockney with his shotgun being partially blocked by the B pillar of the police car.

Mossberg Compact Cruiser, of which the Mariner is a marinekote version.