From Internet Movie Firearms Database - Guns in Movies, TV and Video Games
(Redirected from The Red Spectacles)
Jump to navigation Jump to search 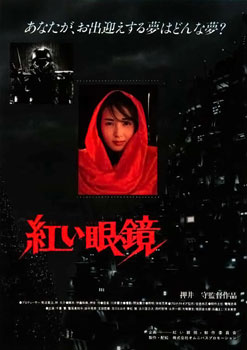 The Red Spectacles is the first film entry in the Kerberos Saga, an alternate history political thriller series by Mamoru Oshii (Director of Ghost in the Shell and The Sky Crawlers). Set in the 1950's, The Kerberos Saga depicts a history where the United States chose not to intervene in either World War, Japan sided with the Allies, and Germany defeated and occupied Japan for nearly 10 years, leaving the country in a state of political turmoil.

To cope with the increase in anti-government movements, the Japanese government founds the Special Armed Garrison, more commonly known as "Kerberos". The Kerberos squad consists of highly trained, heavily armed soldiers who utilize special suits of armor known as "Protect Gear", and is tasked with quelling anti-government movements through lethal force. As the political scene shifts, the Japanese government orders the Kerberos squad to disband. They refuse to do so, resulting in a bloody confrontation between the Kerberos Units and the Tokyo Capital Police known as the "Kerberos Riot".

The Red Spectacles picks up immediately after the Kerberos Riot and follows senior detective Koichi Todome (Shigeru Chiba), a member of the Kerberos squad who manages to escape from Tokyo, only to return several years later for unknown reasons. The film is mostly known for its unusual narrative style. After Todome returns to Tokyo, the entire film switches from color to black-and-white, and every event is told through symbolic and comedic imagery, masking the film's true tone.

A note on the dates: The Kerberos Riot was originally set during the mid- to late-1980's, with the events of The Red Spectacles occurring in 1995. The Kerberos Saga timeline was retconned as being set during the 1950's after the release of Jin-Roh: The Wolf Brigade).

NOTE: Being that this was filmed in Japan, none of the firearms are real and are most likely capfiring blowback replicas.

The following guns were used in the movie The Red Spectacles:

The MG34 is the primary weapon of the Kerberos squad. 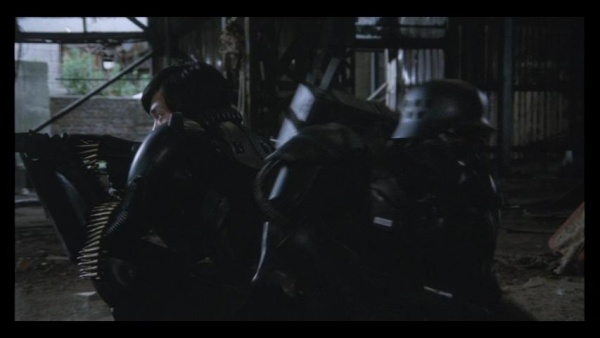 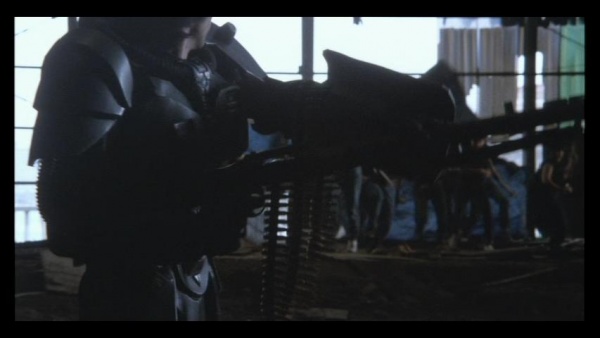 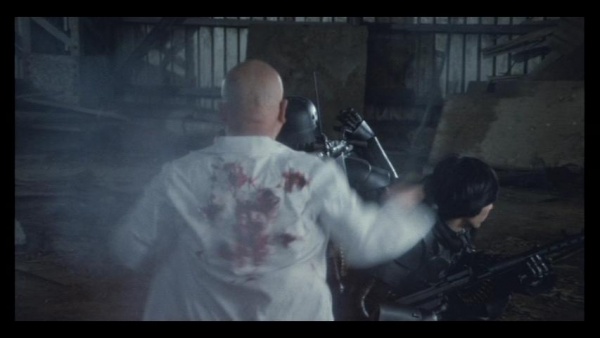 The Mauser M712 Schnellfeuer is the standard-issue sidearm of the Kerberos squad, and is also used by other characters in the movie. 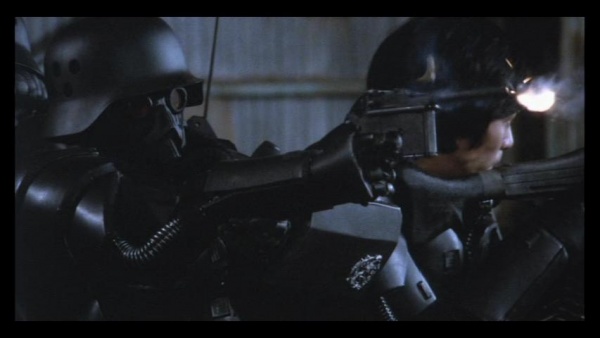 A good shot of the C96 mid-firing 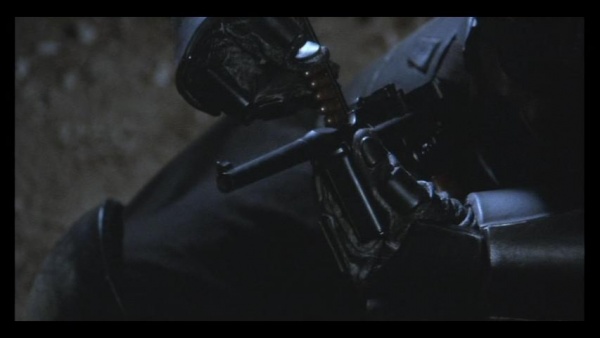 Another good shot of the C96 being reloaded. 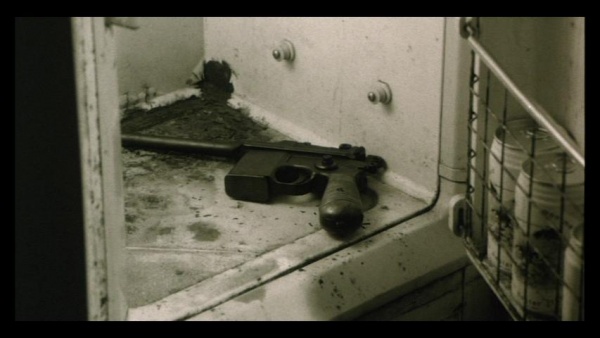 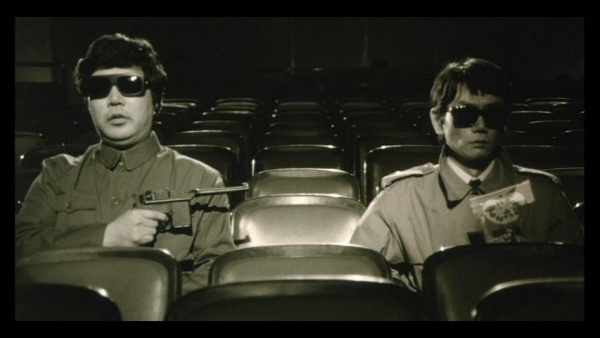 Bunmei Muroto (Tessho Genda): "Let me give you a little present . . ."
It appears Kim Jong Il is now doing his own assassinations. 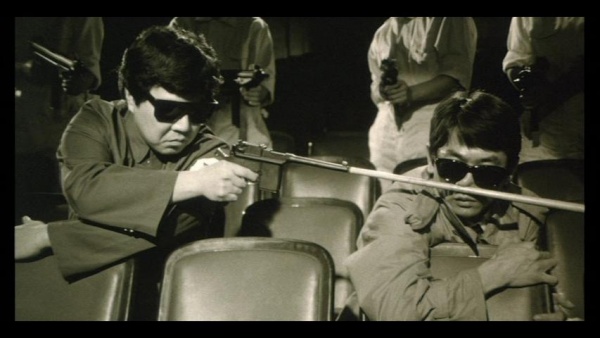 The MAC-11 is seen in the opening shoot-out. 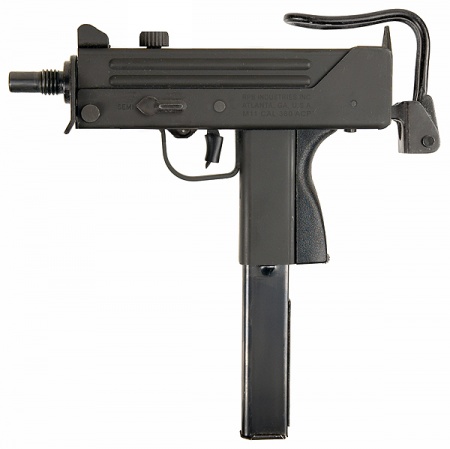 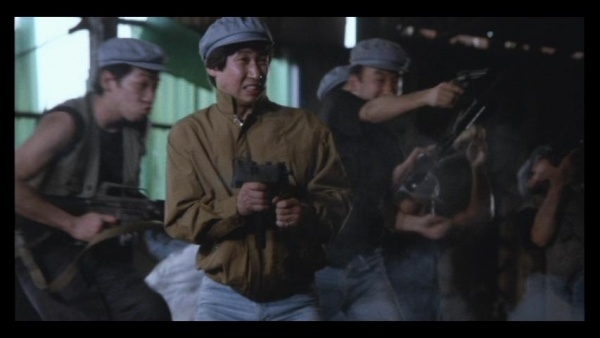 The Heckler & Koch MP5SD is seen in the opening shootout. 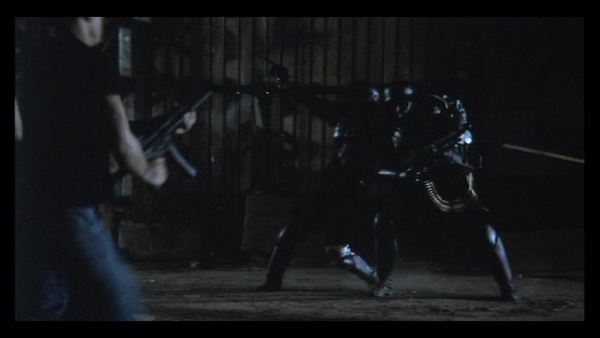 Hard to see, but man has an MP5SD of an unknown variant.

An MGC M16 replica is seen in the opening shootout.

An MGC16 is seen in this shot on the left

A hit squad, sent to assassinate Koichi Todome use Beretta M12s, all of whose members wear mime-like white face paint for no apparent reason. Koichi commandeers one of these submachine guns and fires it at the hit squad. 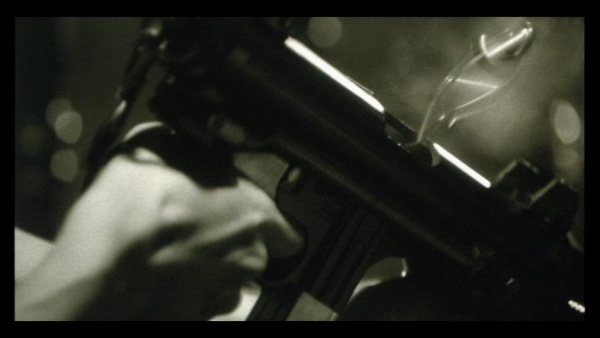 A close-up shot of the Beretta Model 12 ejecting brass while firing. 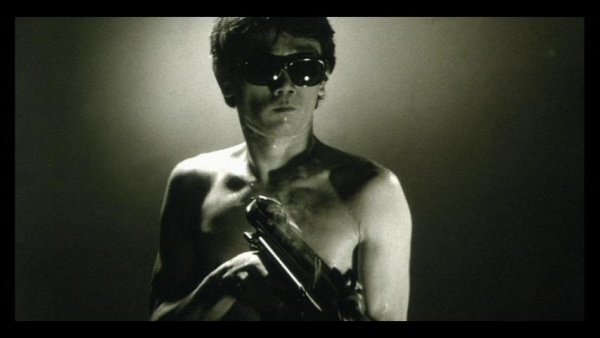 Koichi Todome: "Dogs, live. Cats, die."
Koichi ventilates some hit squad members coming up the stairs to his hotel room. What this screenshot doesn't tell you is that before this, he defeats all the ones already on his floor with a montage of exaggerated martial arts (while defeating another in an apparent challenge to finish off a can of bad-tasting beer without grimacing once). It also doesn't tell you that throughout this bizarre action sequence, Koichi is only wearing his ever-present sunglasses (at night).

An Uzi is seen in the aftermath of the opening shootout. 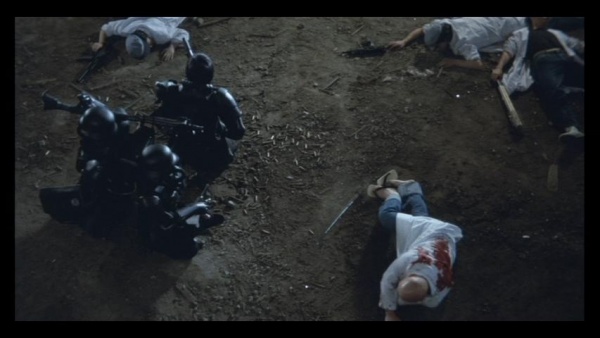 A guard outside the illegal noodle stand is seen with a M1928 Thompson. 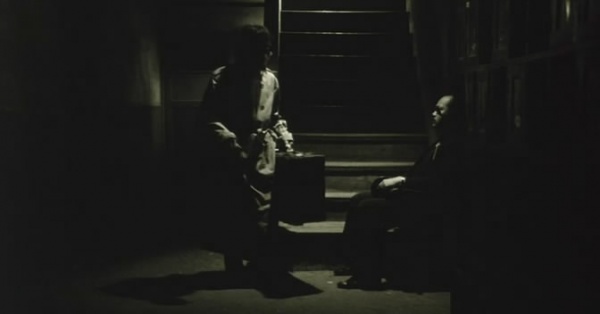 The guard holds the Thompson in his lap. Despite the shadows, the weapon's iconic drum magazine is clearly visible. 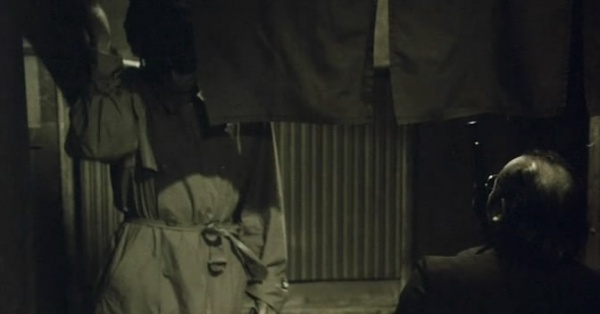 The guard shifts his Thompson, offering us a glimpse of the 1928's signature vertical foregrip and Cutts compensator

The cook running the illegal noodle stand has a M1911 tucked in the strap of his apron. 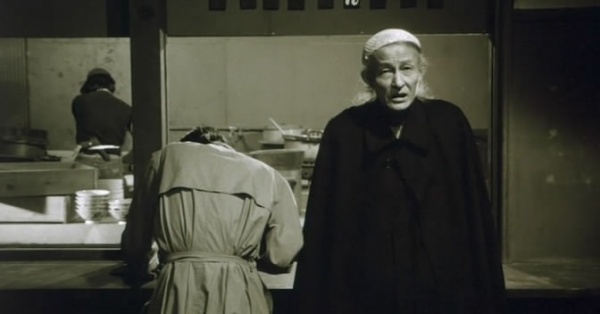