From Internet Movie Firearms Database - Guns in Movies, TV and Video Games
(Redirected from The Ninth)
Jump to navigation Jump to search

The Ninth (Russian: Девятая; Devyataya) is a 2019 Russian mystery thriller.

The following weapons were used in the film The Ninth:

The Colt's grip is seen under the book of grimoires.

Olivia Reed (Daisy Head) grabs a book of grimoires, which gave a better view of the Colt.

The Colt's grip is seen during Ganin's animated tales.

Policeman Fyodor Ganin (Dmitriy Lysenkov) carries a Pettingill revolver as his duty sidearm throughout the movie.

Ganin brandishes his revolver after firing it.

The revolver's barrel is seen.

The grip is partly seen.

Another view of the grip.

Nearly all Russian policemen can be seen armed with the Smith & Wesson Schofield. Sergey Rostov (Evgeniy Tsyganov) grabs one at the film climax. This revolvers are airsoft guns by WinGun, a model named "Gun Heaven 1877 Major 3".

Policeman (in the background) with the holstered revolver.

Another policeman with the holstered revolver (pointed by the red arrow).

Policemen draws their S&W revolvers during the raid.

The S&W revolvers can be seen.

Sergey Rostov grabs the revolver from a policeman's holster...

...and raises it. Note the grip with the hole for the pressure key and the cover for the CO2 cylinder's compartment.

The another view of the same scene. Note the plugged barrel.

Four Percussion Dueling Pistols can be seen hanging on the wall in Ganin's apartment.

Two pistols and grip of the third one is seen to the left.

A slightly different view of the same guns.

A perfect view of the weaponry. Percussion dueling pistols are seen to the left and right parts of the decoration.

Two Pinfire Pistols can be seen hanging on the wall in Ganin's apartments. They may be the same props used in Duelyant, which was made by the same studio. 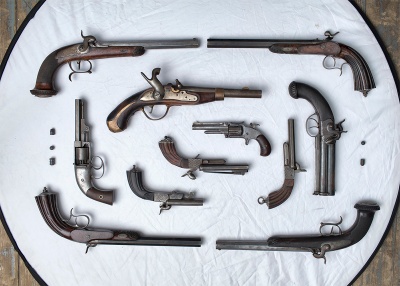 The pistols are seen in the background.

A perfect view of the weaponry. Pinfire pistols are seen at the center part of the decoration.

An unknown rifle or shotgun can be seen in the hands of policemen during the raid. It was seen very briefly and from a distance, but the ramrod and short stock can be seen.

Policeman holds the long gun (pointed by the red arrow).

Note the ramrod under the barrel.

The buttstock of the gun (pointed by the red arrow) is seen. Policeman at the right holds a S&W revolver.

Another view of this gun (pointed by the red arrow).

A cannon style ashtray can be seen in Ganin's apartments.

The ashtray is seen on the table (pointed by the red arrow).
Retrieved from "https://www.imfdb.org/index.php?title=Ninth,_The&oldid=1349152"
Categories: