Next Three Days, The

From Internet Movie Firearms Database - Guns in Movies, TV and Video Games
(Redirected from The Next Three Days)
Jump to navigation Jump to search 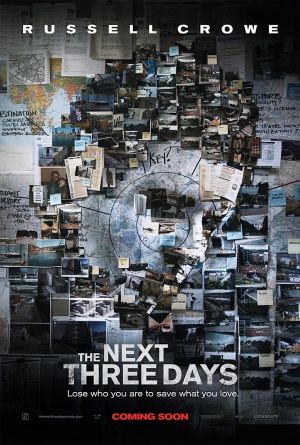 The Next Three Days is a 2010 crime thriller co-written and directed by Paul Haggis (the director of Crash and a co-screenwriter of Million Dollar Baby and Casino Royale), starring Russell Crowe and Elizabeth Banks, with Lennie James, Brian Dennehy, and Liam Neeson. The film is a remake of the 2008 French film Anything for Her.

Russell Crowe stars as John Brennan, an average man whose life is turned upside down when his wife Lara (Elizabeth Banks) is imprisoned for a murder she did not commit. With no prospects to have her legally exonerated and Lara facing a life sentence, John puts into motion a plan to break her out of prison.

The following weapons were used in the film The Next Three Days:

The Glock 17 lying on the counter in the gun shop.

John's Glock next to him as he contemplates robbing a bank.

John Brennan (Russell Crowe) with his Glock during the meth lab robbery.

Lt. Nabulsi with his Glock.

During the methamphetamine lab robbery, John takes a Colt SF-VI/DS-II. 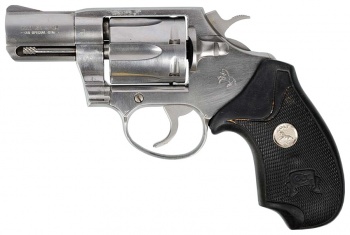 The Colt SF-VI/DS-II on a table before John grabs it.

A stainless Ruger Vaquero is seen in a display case of the gun shop where John purchases his Glock. 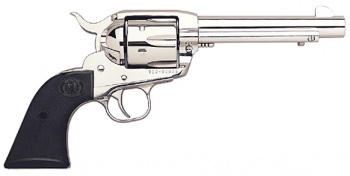 The Vaquero in the display case, to the left.

A pair of Ruger Super Blackhawks, one blued and one stainless, are seen in the same display case.

Two Blackhawks next to the Vaquero.

Alex (Kevin Corrigan) uses what appears to be a Smith & Wesson Model 19 revolver during the meth lab robbery. It's too dark to make a proper ID. 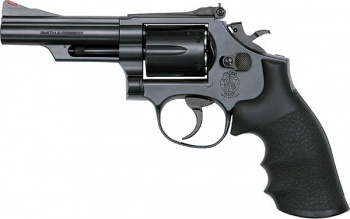 A revolver in Alex's hand.

Officer Barney Peters (Sean Huze) surrenders his sidearm as a safety precaution during a prisoner transfer. There's not enough detail to make a proper ID, but a pistol has an external hammer and a slide-mounted safety.

Officer Barney Peters (Sean Huze) surrenders his sidearm as a safety precaution during a prisoner transfer.

One of the meth dealers (Jeff Hochendoner) uses a Remington 870 during the robbery.

A meth dealer (Jeff Hochendoner) with his shotgun.
Retrieved from "https://www.imfdb.org/index.php?title=Next_Three_Days,_The&oldid=1513939"
Categories: