From Internet Movie Firearms Database - Guns in Movies, TV and Video Games
(Redirected from The Matrix Resurrections)
Jump to navigation Jump to search

The Matrix Resurrections is the fourth feature film in The Matrix film series. Lana Wachowski returns as the co-writer/director for this 2021 sequel, which finds Neo (Keanu Reeves) once again discovering his true destiny within the computer program known as the Matrix. Carrie-Anne Moss returns as Trinity and Jada Pinkett Smith returns as Niobe, and the cast includes Jessica Henwick, Neil Patrick Harris and Yahya Abdul-Mateen II. The film was released theatrically and on the streaming service HBO MAX on December 22, 2021.

The following weapons were used in the film The Matrix Resurrections:

As per the norm in The Matrix film series, the Agents within the Matrix wield Desert Eagle Mark XIX pistols in .50 AE.

Extreme close up of the .50 AE Desert Eagle Mark XIX pistol held by an Agent.

What appears to be an IWI Masada pistol is used by Morpheus (Yahya Abdul-Mateen II), along with a Heckler & Koch MP5K . 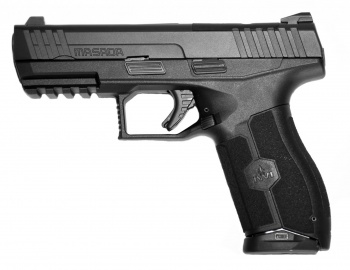 Morpheus (Yahya Abdul-Mateen II) wields an IWI Masada in the left hand, along with a Heckler & Koch MP5K in his right.

Morpheus crosses over with the Masada. 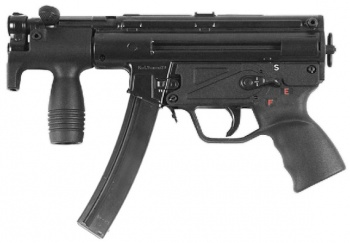 Morpheus crosses over with the MP5K and the IWI Masada.

A SIG-Sauer MPX Copperhead K is used by Berg (Brian J. Smith) during the shootout in the abandoned church. ​

Berg readies his weapon for combat.

SWAT officers in the Matrix appear to be armed with Heckler & Koch HK416D rifles fitted with red dot sights and laser designators.

M4A1 carbines are used by some SWAT officers.

A SWAT officer in the Matrix can be seen firing what appears to be a Milkor MGL launcher. It's possible that the launcher is in reality an airsoft replica.

At the left, a SWAT officer in the Matrix can be seen firing what appears to be a Milkor MGL launcher.
Retrieved from "https://www.imfdb.org/index.php?title=Matrix_Resurrections,_The&oldid=1527806"
Categories: