From Internet Movie Firearms Database - Guns in Movies, TV and Video Games
(Redirected from The Last Castle)
Jump to navigation Jump to search 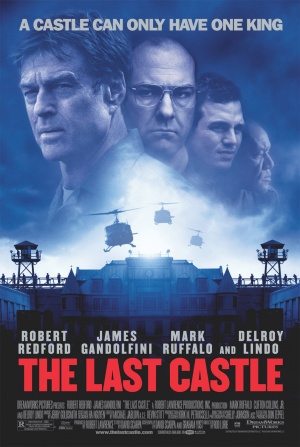 The Last Castle is a 2001 drama starring Robert Redford as a former US Army general sentenced to a military prison for disobeying an order that caused the deaths of men under his command. During his incarceration, he clashes with the prison warden (James Gandolfini). The film's cast includes Steve Burton, Mark Ruffalo, Michael Irby, and Delroy Lindo.

The following weapons were used in the film The Last Castle:

The Mossberg 590 shotgun is the weapon carried by all of the guard tower sharpshooters. These 590s are modified with Ghost Ring sights and are seen loaded with rubber bullets for the majority of the film.

At the beginning of the film, a guard overlooks the yard, Mossberg 590 slung.

Cpl. Zamorro (David Alford), the prison's most dangerous shot, is armed with the 590 as he awaits orders to fire.

He hears the order over radio...

A guard fires at the rioting prisoners.

Another guard firing his Mossberg.

A view of the ghost ring sights as Zamorro lines up a shot.

Zamorro loads a lethal deer slug into his Mossberg 590, instead of a rubber bullet, thus proving an earlier claim of his brutality.

The M16A2 is also seen wielded by some of the prison guards.

Note the M4-style barrel on this particular rifle. Thanks to MT2008 for identification.

Another shot of the Designated Marksmen, as Col. Winters demands them to fire.

The marksmen stand down during a confrontation with former General Irwin (Robert Redford).

Due to its resemblance to the M9, the Army's standard-issue sidearm, the Beretta 92FS makes an appearance in M12 holsters and is seen being wielded by Colonel Winters (James Gandolfini) and Captain Peretz (Steve Burton).

The sidearm is surrendered to Captain Peretz.

During his conversation with Yates, Colonel Winters (James Gandolfini) is cleaning a Remington 1858 New Army.