From Internet Movie Firearms Database - Guns in Movies, TV and Video Games
(Redirected from The Hot Rock)
Jump to navigation Jump to search 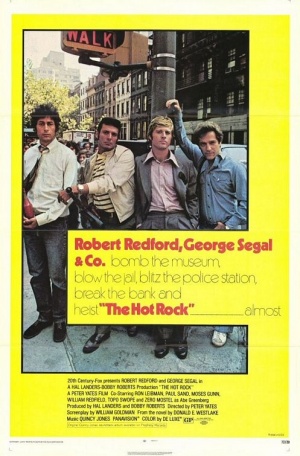 The Hot Rock is a 1972 heist film starring Robert Redford as a thief just released from prison who is asked to pull off the job of a lifetime. The film was directed by Peter Yates (Bullitt) and was an adaptation of Donald E. Westlake's novel of the same name. William Goldman (Butch Cassidy and the Sundance Kid, Marathon Man, Misery) wrote the adaptation.

The following weapons were used in the film The Hot Rock:

A Carl Gustav M/45 submachine gun is carried by Dortmunder (Robert Redford) when he and the crew break into the NYPD precinct.

The crew land on the roof armed with the Carl Gustav.

Dortmunder holds the Carl Gustav while breaking into the jail.

NYPD officers with their revolvers.

Officers raise their revolvers, thinking they're under a terrorist attack.

The precinct lieutenant exits the station armed with a Smith & Wesson Model 36. Other plainclothes officers are also seen with them.

A detective with his snubnose revolver.

The precinct lieutenant exits the station armed with a Smith & Wesson Model 36.

A plainclothes officer is seen using the snubnose revolver on the precinct street.

A plainclothes officer is seen using what appears to be a High Standard FLITE KING K-1200 Riot Standard Model shotgun while in the street.

A plainclothes officer is seen using a shotgun on the precinct street.
Retrieved from "https://www.imfdb.org/index.php?title=Hot_Rock,_The&oldid=1279800"
Categories: