From Internet Movie Firearms Database - Guns in Movies, TV and Video Games
(Redirected from The Headless Horseman)
Jump to navigation Jump to search

The following weapons were used in the film The Headless Horseman:

The guests at the ball in Poindexter's hacienda Casa del Corvo hold Colt revolvers during the alarm due to the alleged appearance of Indians.

An officer with a Colt in the same scene. Next moment his Colt switches to a Lefaucheux revolver (see below).

A closer view of a Colt in the hand of one of the guests (at the left) in the same scene.

A troublemaker in the town is disarmed of his Colt by a perfect stroke of the whip.

Maurice Gerald draws his revolver on Cassius Calhoun during the standoff in the saloon.

Calhoun's Lefaucheux switches to a Colt during the duel.

Miguel Diaz threatens Isidora Covarubio, who uncovers him to be the gang leader El Coyote.

Cassius Calhoun drops his Colt in the final scene.

Cassius Calhoun (Aarne Üksküla) is seen with a Lefaucheux Model 1854 revolver that constantly switches to a Colt and back again. Lefaucheux revolvers are also seen in hands of US Army officers and townsmen. 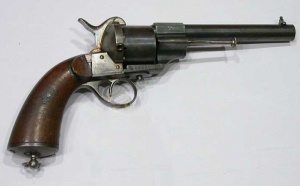 An officer that was earlier seen with a Colt now holds a Lefaucheux revolver.

A close view of the Lefaucheux revolver in hand of the officer.

A barman in Diaz' saloon carries a Lefaucheux revolver in holster.

Calhoun with a Lefaucheux and Maurice Gerald with a Colt in a standoff.

Calhoun enters the saloon during the duel. In the next moment, his Lefaucheux switches to a Colt.

Calhoun carries a Lefaucheux revolver in a holster.

A townsperson at the right holds a Lefaucheux revolver.

US Army Major (Rolando Dias Reyes) draws his Lefaucheux revolver when the murderer is exposed.

Isidora's revolver is seen at the center.

Another view of Isidora's revolver.

Isidora carries her revolver in a holster.

During the scene of the alarm in Casa del Corvo, one of the guests holds a revolver that looks similar to a percussion Colt revolver but is definitely smaller than a Colt 1851 Navy.

The man in a grey suit at the left holds a revolver.

A snub nose revolver (possibly some kind of Webley Bulldog) is seen in hands of a townsman during the trial.

A short-barreled revolver is seen over Calhoun's shoulder.

Close view of the Colt Model 1855 in hands of a henchman.

Another view of the same man with the rifle.

US Army cavalrymen and local townspeople are mostly armed with Sharps carbines. Most likely it's the Sharps 1863 Carbine.

A guard in a wagon at the left holds a Sharps carbine.

A townsman with a Sharps carbine leads Henry Poindexter's horse.

A member of the posse holds his Sharps carbine at the right.

A Sharps carbine is seen in the hands of a posse member at the left.

Sharps carbines in the barracks (at the right).

Barrel and muzzle at the right.

In the scene of the trial, some townspeople in the background hold rifles that appear to be anachronistic and out of place Mosin Nagant M1938 Carbines, probably used due to insufficient number of authentic Sharps carbines.

A pair of possible M38 Carbines are seen in the background.

The barrel of a possible M38 Carbine is seen to the left of Calhoun.

The appearance of the rifle to the right of Calhoun seems to be that of an M38 Carbine.

Barrel can be seen.

A good view of the percussion cap lock.

A musket and a Sharps carbine are seen (at the right) during the alarm in Casa del Corvo.

A townsman holds a musket in the background.

A musket is seen on the wall of Maurice Gerald's cabin. Note that the bandoleer holds metallic rifle cartridges that would not be compatible with this gun and appear to be from a later time period.

Townsmen with various long guns during the trial.

A sitting townsman holds a musket during the trial.

A man at the right holds a percussion cap musket.

A good view of the barrel.
Retrieved from "https://www.imfdb.org/index.php?title=Headless_Horseman,_The&oldid=1431650"
Categories: