Gendarme Takes Off, The

From Internet Movie Firearms Database - Guns in Movies, TV and Video Games
(Redirected from The Gendarme Takes Off)
Jump to navigation Jump to search

The Gendarme Takes Off (original title Le gendarme en balade) is a 1970 French comedy directed by Jean Girault and starring Louis de Funès as Ludovic Cruchot, the sergeant of French gendarmerie. This is the fourth movie about the adventures of Cruchot, started by The Gendarme of St. Tropez.

The following weapons were used in the film The Gendarme Takes Off:

Several of the marines, guarding the ammunition depot, are armed with MAT-49 SMGs.

Several of the marines, guarding the ammunition depot, are armed with MAS-36 rifles.

A poacher runs away, pursued by Cruchot.

An Over and Under Shotgun is seen in hands of the butler (Christor Georgiadis) in Madame Cruchot's villa.

The butler fires from the window.

A crate of OF 37 hand grenades is seen in the ammunition depot. The grenades are painted in blue, which indicates that this is a training version of OF 37. One of the teenagers inside the depot is seen juggling two grenades; later, he accidentally drops his lit cigarette in the crate, prompting Cruchot and Fougasse (Jean Lefebvre) to remove some grenades before moving the crate away. Fougasse and Merlot (Christian Marin) use grenades afterwards to distract the marines when the alarm goes off. 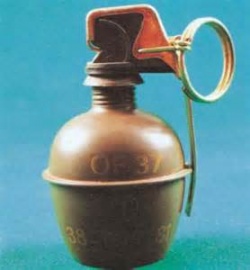