From Internet Movie Firearms Database - Guns in Movies, TV and Video Games
(Redirected from The Badlanders)
Jump to navigation Jump to search

The Badlanders is a 1958 Western movie directed by Delmer Daves and starring Alan Ladd and Ernest Borgnine. The movie is loosely based on the 1949 novel "The Asphalt Jungle" by W. R. Burnett (earlier adapted into The Asphalt Jungle film noir (1950)), but the story is set in 1898 in Arizona. Peter Van Hoek ("Dutchman") (Ladd) and John "Mac" McBain (Borgnine) are released from prison and head separately to the town of Prescott. Dutchman, former mining engineer, was framed for the robbery of a gold shipment and wants to cleanse his name.

The following weapons were used in the film The Badlanders:

Lee raises his revolver at Mac.

Leslie knocks Lee's revolver with a well-aimed shot. At the background Dutchman holds a barely seen revolver (marked with a red arrow) that he took from a townsman a moment earlier. Dutchamn with a revolver is seen better on a promotional image.

Another view of Leslie's revolver.

Leslie holds his revolver. The stag horn grip is seen.

Lee holds his revolver (at the left) when the gang breaks in Vincente's house.

Mac fires at Jeff. In next moment Dutchman picks up Jeff's revolver (which is better seen on a promotional image).

Lee holds his revolver during the shootout with Dutchman and Mac.

A good view of Mac's revolver.

Comanche holds a Marlin 1889 when the gang breaks in Vincente's house.

Cyril Lounsberry with a Marlin during the shootout with Dutchman and Mac.

Comanche on the church roof.

Sample with the rifle.

A Marlin Model 1893 rifle is seen in the gun rack in the office of Yuma Prison Warden. 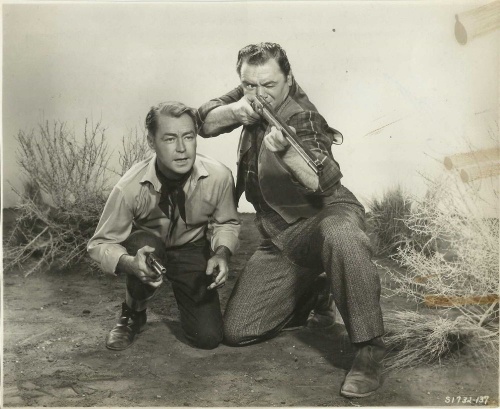 Dutchman with a Single Action Army revolver and Mac with a Marlin Model 1893 rifle (note the faceted barrel) on a promotional image. Mac doesn't use this gun on screen.

Two Winchester Model 1892 rifle is seen in the gun rack in the office of Yuma Prison Warden.

A Springfield 1873 "Trapdoor" rifle is seen in hands of a Mexican when Anita calls her people against Lounsberry's gang.

Most Mexicans, summoned by Anita to help Dutchman and Mac, are armed with Springfield 1861 rifled muskets (other versions of this gun, like M1863 or M1864, are possible but seem less likely guess).

Mexicans with muskets come to save Dutchman and Mac. 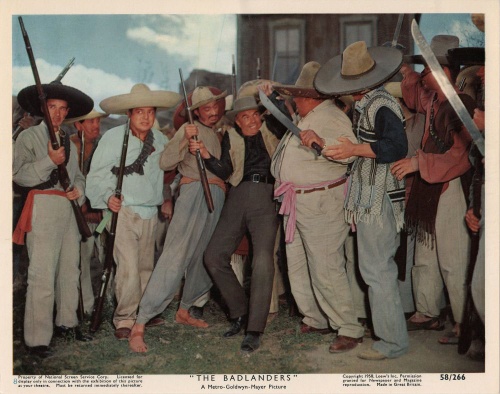 A Double Barreled Shotgun is briefly seen in hands of a stagecoach guard.

A muzzleloading cannon is seen on the street in Mexican settlement. It is decorated for fiesta.
Retrieved from "https://www.imfdb.org/index.php?title=Badlanders,_The&oldid=1419904"
Categories: