PS: Due to it's low budget, the quality of screenshots from this film may be low.

The following weapons were used in the film Tatar Operation (Tatar ajillagaa):

A close-up view of the Makarov PM in Tulga's hand.

Gyalbaa turns the Makarov PM onto himself.

The percussion cap pistol can be seen on the table (1).

Gun dealer mockingly calls this gun the "earliest musket in the world".

A slightly different view of the pistol.

A percussion hammer can be seen.

Two Smith & Wesson New Model No.3s can be seen on the table.

A slightly different view of these revolvers (2).

Tulga with the AKMS on his shoulder.

A policeman aims the AKMS.

Police officers fire their AKMS rifles in the background.

A good view of the AKMS rifles in the hands of police officers.

AKMS muzzle can be seen.

Tulga (Erdenebileg Ganbold) can be seen armed with the 9A-91.

A Matchlock Musket can be seen in the base of a gun dealer. Koliaa briefly holds it.

Koliaa holds the musket (pointed by the red arrow). The matchlock is seen.

A Micro Galil can be briefly seen in the hands of police officers.

An officer runs, gun in hands.

The officer aims his weapon...

Koliaa looks at the Maxim.

Tulga and Koliaa imagine themselves operating the Maxims.

Tulga puts his hand on the Maxim's barrel.

A perfect view of the Maxim.

In a continuity error, the Maxim turns into a Degtyaryov DP-27 at one point.

A close view of the launcher in Koliaa's hands.

Two 6G30 launchers can be very briefly seen in the hands of Gyalbaa (Dagvajamts Batsukh). 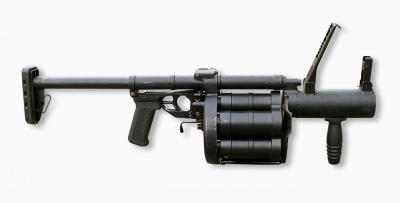 Gyalbaa's character aims a pistol on the screen.
Retrieved from "https://www.imfdb.org/index.php?title=Tatar_Operation_(Tatar_ajillagaa)&oldid=1341393"
Categories: