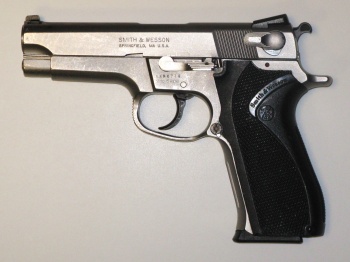 A Smith & Wesson 5906 used in Chuck - 9x19mm, the weapon pictured here was Yvonne Strahovski's actual gun for the past two seasons of the show. It was supplied to the production by Independent Studio Services. 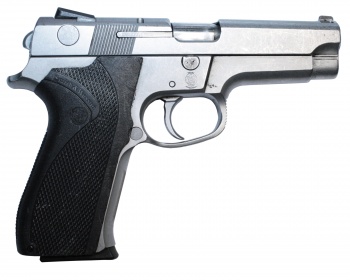 World IMFDB Exclusive: Screen used Smith & Wesson 5946 - 9x19mm. This blank firing weapon is verified as screen used by actor Michael Imperioli in The Sopranos. This specific gun was the one fired onscreen when Christopher and Paulie kill Mikey Palmice in I Dream of Jeannie Cusamano (1.13). More detailed images and purchasing information on this item can be found at The Golden Closet; see here. 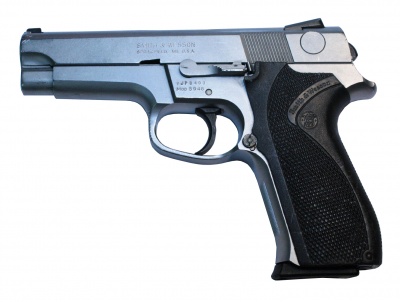 Another screen-used Smith & Wesson 5946 from The Sopranos. This one was used by actor Steven Van Zandt (Silvio) when he, Paulie, and Tony kill Pussy in Funhouse (2.13). More detailed images and purchasing information on this item can be found at The Golden Closet; see here. 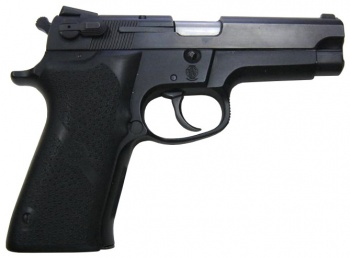 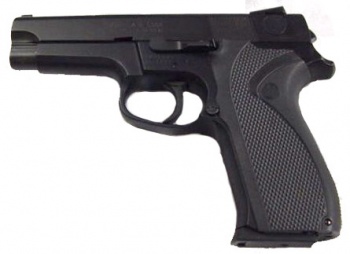 As a friend of numerous RCMP officers who carry this as their sidearm, and a person who's both held and fired one, I can confirm that the 5906 atleast holds 15 rounds in the magazine. M14fanboy

I was confused because I've seen alot of magazines made for the 5900 series in both 14 and 15 round capacities.

All the MPM pics on this page, are screen used guns, but I was in such a rush when I photographed them, I didn't have time to check as to what films they were in, but seriously, they are well used guns, Ellis Mercantile, Stembridge, Cinema Weaponry, etc. Every MPM pic (versus the jacked pics) for this page came from a movie arsenal. Arghhh. I bet some of these are screen used for their listings but I can't verify them. :( MoviePropMaster2008 17:11, 7 August 2010 (UTC)

Just cleaned up the 5906 section. The movies were added sporadically with no order by date. Be sure to add to the list in descending order by date of film or tv series release. --Luckyluciano 00:27, 1 March 2011 (UTC)

They jumped on the polymer framed bandwagon with the M&P line and decided to put all their eggs in that basket. However for a long time (possibly still now but if not up till 2010 or so) the 3rd gen S&W autos were still actually being produced, but only for special LE contracts and were not available to the public. If they bought them back I think they would be pretty popular, as currently there are not many companies that make all metal guns, and I think there is still a market for that. --commando552 (talk) 14:31, 24 June 2013 (EDT)

Anyone know off-hand, either closely or exactly, when this series of weapons went from the hooked/squared trigger guard to the rounded one? I figure it wasn't long after introduction, somewhere in the early 90s, perhaps? StanTheMan (talk) 22:28, 8 November 2014 (EST)

My guess would be that they started moving to it in 1990, as the 4506 which was introduced in 1989 started with the square one, but the 4504 which was introduced in 1990 seemingly only ever had the rounded one. I imagine it would have taken a couple of years to work through the old stock and change the tooling for all of the models though. --commando552 (talk) 05:45, 1 September 2021 (EDT)

It was removed since there is no documented use of the 5944 in any productions. Carbon blue steel slide and aluminum alloy lower frame. Great pistol and rare. Smith only produced the model from 1991-1992. Probably just a little over 1,000 units manufactured. --Jcordell (talk) 16:25, 28 August 2021 (EDT) 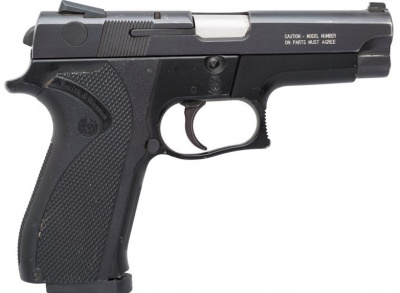 Odd and obscure? Not really. As for why it was issued, well, it's a high-cap 9mm DAO with no manual safety; In terms of operation it's essentially identical to the Glock. That and in S&W's case there was already an existing customer relationship with NYPD. StanTheMan (talk) 18:22, 1 December 2016 (EST)

I inherited my dad's old duty pistol (Idaho State Police) in 2016. It's a S&W 4586 - the DOA version of the Smith & Wesson 4566. Personally I like the DAO trigger. It's easy to reach with my short fingers and I find it very smooth and consistent. When ISP went to the 4586 in 1991 I didn't like the action, but I wasn't a very experienced shooter back then. I've gotten better and I appreciate the smoothness. It's my understanding that all the DAO actions in the 3rd generation pistols were the same. --Jcordell (talk) 05:38, 1 February 2018 (EST)

I wonder why no game developers ever use these. They're not bad looking by any stretch of the imagination, and they're solidly a "cop gun." --A Jaded Lizard (talk) 19:03, 6 December 2017 (EST)