Thaddeus nice ID on the Jetfire. I'll try and get a screenshot of it in the movie. I added that the Smith & Wessons were 5946s and made a page for that gun and updated the Jetfire page with the movies its been in. Do you know if you see Tarantino as Mr. Brown with a gun? Bunni 10:18, 11 June 2007 (PDT)

I'm pretty sure that the film takes place in Los Angeles ( The police officers uniform). the film was made in 1992, many years after they introduced the Beretta 92fs but they officers chasing Mr. pink wield Smith & Wesson model 19's.

Weren't LAPD officers who were issued revolvers allowed to carry them after the Beretta was introduced if they wanted to? I'm pretty sure the NYPD was like that, so maybe LAPD too. But most likely the reason is due to the films budget. --Predator20 14:53, 7 November 2009 (UTC)

Only old timers were allowed to keep their revolvers. The YOUNG officers as seen in the film would not have revolvers, nor would have been allowed to ask for one. MoviePropMaster2008 04:09, 8 November 2009 (UTC)

Yes, this movie was made in 1992 and the LAPD switched to semi-autos in 1988, so only officers who were on the force for about 5 years would be allowed to carry revolvers. MPM is right, these officers are definitely rookies, and therefore shouldn't be carrying revolvers. But, yes, Predator, this movie was very low budget. In fact, several of the actors wore their own clothes (Chris Penn is wearing his own personal track suit, Steve Buscemi wears his own black jeans in lieu of suit pants) and the Cadillac Michael Madsen gets gasoline out of was actually his own Cadillac. So I'm assuming that revolvers were just easier to get because semi-autos were much more innovative and, therefore, more expensive, whereas revovlers have been around for a while and were still pretty popular at the time. At least, that's what my guess is.

BTW: Although, in the past, LADP officers were allowed to carry .357 magnum revolvers as long as they carried them loaded with .38 special ammo, by 1992 only .38 special revolvers were allowed (some officers loaded their sixguns with .357 ammo, regulations notwithstanding). Therefore, cops carrying a S&W 19 and a Colt Trooper is another (minor) mistake of the movie Rafa

So I'm assuming that revolvers were just easier to get because semi-autos were much more innovative and, therefore, more expensive, whereas revovlers have been around for a while and were still pretty popular at the time. At least, that's what my guess is.

Cost has nothing to do with it. Movie guns are always rented, not bought, and I'm pretty sure that the rental fees for handguns are relatively uniform, regardless of type. I'm guessing that the cops carry revolvers because this makes them outgunned by the robbers with their high-capacity S&W autos. If the LAPD officers who chased Mr. Pink had been carrying 15-shot Berettas instead of revolvers, he wouldn't have been able to hold them off while making his escape nearly as easily. -MT2008

I disagree with the fact that Mr. White's S&W 659 is his "issued weapon". I believe that both his S&W 639 and S&W 659 are his personal weapons. In a deleted scene where Freddy Newandyke (Mr. Orange) is reading Larry Dimmick's (Mr. White) criminal record, it states that Dimmick is known for using TWO Smith & Wesson 9mm pistols. One as his primary sidearm, the other as a backup (and he always carries a back up, it states). Furthermore, his nickname, according to his record, is "Two Guns". Now, while it is clear that the 639 is his primary, it is more likely that the 659 is his backup, not an issued weapon for the heist. Although there is the possibility that there are no issued weapons given to the thieves, and that they just all happen to opt to carry S&W 659s, there isn't any strong evidence to back this up (except in Mr. White's case). -Gunman69 23:32, 7 January 2010 (UTC)

That's a very interesting point. Someone had posted that in the deleted scene, white carried only one S&W 9mm. That and the fact that everyone had a 659 was all I had to go on the "personal gun" theory. I've never seen the deleted scene so I don't know what it includes or how to interpret it myself. I seriously doubt absolutely everyone prefers a 659 though and has one for theirslef, and stick to the theory that they were issued. For example, we have an ex-con (Blonde) who was more than likely given the gun by Joe, and Orange who already had guns, but ended up having a 659 also. The thing about the deleted scene evidence too is that.... it's a deleted scene, and it's not included in the actual movie, and whether it was deleted for what I'm saying or another reason entirely, it doesn't really count as far as the final cut goes, so therefore, White, for whatever reason, has a 639, which has to be a personal gun as no one else has one, and everyone else has a 659, and Whites may or may not be personal, but it's equally possible it's either one, and since everyone has a 659 and not a 639, we can more easily lean toward the theory that they were all issued. Also, Pink's holstered gun when he gets punched is a 6906, not a 669, please stop changing it. --Yournamehere 19:37, 8 January 2010 (UTC)

As far as the 6906 goes, I thought maybe it'd be a 669 just because all the other guns were 2nd gen, so it would make sense, but I'm not going to pursue that argument. But in the deleted scene it specifically states TWO S&Ws, not one like someone previously stated. I suppose there is also the possibility that Mr. White carried TWO S&W 639s, as well as his issued weapon. That actually makes sense if it wasn't a coincidence that Mr. White carries the same gun that is issued by Joe Cabot. Something to think about. Also, I got the 15th anniversary edition of the movie, and I wasn't sure if you used that for your screencaps. If you didn't, I'd like to upload these pics from MY movie because they are WAY clearer than my old ones (and they look brighter than the ones currently up). If you used the 15th anniversary too, then there were going to be a couple screencaps I was going to add. Just thought I should let you know. :) -Gunman69 00:13, 9 January 2010 (UTC)

Yeah, and the scene where they say he carries two was deleted, and therefore doesn't matter as far as the plot goes. I already stated this.....

I used the Tenth anniversary version for my caps, and they look fine. You said yours were better before, and after a vote they were considered worse, so don't say that they are better, show everyone. If you do add anything, make sure it's sized like the rest of them.

And with the 6906, it has a one piece wraparound grip, and the red dots that indicate that the safety is off are on the frame and not on the slide as seen on 2nd gen models. It's a 6906.

Why does Smith & Wesson consistantly upgrade their automatic handguns? Not just the handguns for that matter but all their guns. Don't get me wrong I love Smith & Wesson firearms, but as soon as they see one little fault they immediatly upgrade it. Look over the Smith & Wesson pages. You will see that the revolvers and handguns all have the same features but slighty upgraded improvements when you go along further.

Because when you find out that your product has a fault that could possibly affect whether an innocent person lives or dies, why wouldn't you want to upgrade your product so that people feel confident using it? hell in this day and age, i wouldn't be surprised if someone could sue S&W for their gun being faulty if they have to use it in a life or death situation, and the gun jams due to something that should've been fixed.Kornflakes89 15:43, 7 February 2012 (CST)

Actually the upgrades are made to simplify manufacturing. Since most of S&W autos were steel framed, they simplified the machining to decrease wear on their tooling reduce cost.

On the page a Smith & Wesson 6906 is listed when is seen holstered . But I'm pretty sure that Mr.Pink uses it when he's chased by the Cops . I've taken a screencap,maybe you can help me. MacGuns659 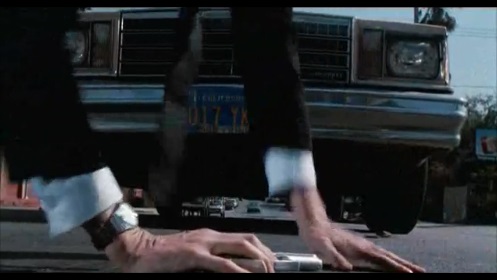