It's a firing revolver but fires rubber bullets ("travmatika", as it's called in Russian) or gas cartridges. When firing, it produces muzzle flame, so the flashes are real rather than digital. Greg-Z (talk) 09:44, 20 July 2015 (EDT)

In this case I think it would actually be more suitable to put it on the Colt Detective Special page, as to me it is a pretty straight copy of the 3rd gen DS which is only distinguishable by the markings, placement of the screws and the grips: 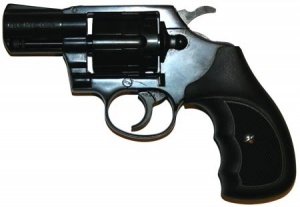 I also doubt that the grenade is F-1 as it seems to have a different fuze. The fuze looks more like Mk 2 hand grenade but the body seems to match F-1. Maybe it's a mockup that was made of parts of several different grenades or maybe it's some training grenade. Greg-Z (talk) 12:35, 20 July 2015 (EDT)