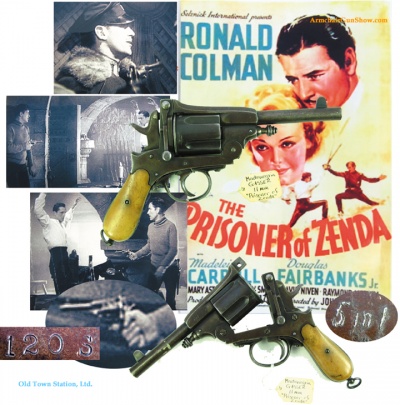 Actual screen-used Gasser Montenegrin M1880 revolvers from The Prisoner of Zenda - image courtesy of the Armchair Gun Show, who are selling the original prop.

The article mentions the weapon using an 11x46mm round. This is larger than the .44 magnum and predates it by many years. However, when the .44 magnum was developed it was billed as the most powerful round in the world (at least for a couple years) which makes me wounder if the gasser round was loaded to lower pressures or if the .44 magnum boast was unfounded. Does anyone know how these rounds compare?

Don't forget you're talking about a black powder round, it's a significantly less efficient propellant than smokeless so yes, the .44 Mag would be more powerful. Other than the Rast & Gasser, none of the Gassers were ever intended to be loaded with smokeless powder and I doubt any of them would stand up to any significant charge of it. My 2nd Model Montenegrin takes the 11.75 x 36mm round, which is also bigger than the .44 Mag (Iit uses cut-down .45-70 cases), but in terms of actual ballistics it's only slighly better than a .45 Colt blackpowder load. The 11 x 46mm round was originally intedned for the Werndl carbine, so it would be slightly better, but not a .44 Mag level. - Nyles

I took out the picture and mention of the Gasser Police Model, as it's not a Gasser at all. It's a Dutch Colonial KNIL M1891 revolver in 9.4mm Nagant. Cool gun, I actually own one, but not a Gasser, nor are any of the guns attached to it in IMFDB actually KNIL M1891s. - Nyles