You got part of this backwards. The Clairidge was based on the Goncz, not the other way around.

Thanks for doing this page!

Absolutely love the info on the Remington Model 7. Just beautiful. I was looking for info on that gun for a while. -- ZG

Quote for the Main Page

Miguel Bain (Antonio Banderas): A Silenced Ruger 22, Classic. You know, I switched when I heard that's what you used.

The way that works out in my mind, is that if you've ever fired a gun outside (without ear protection), your deaf for a few seconds, if not a minute. If you fire one inside, your deaf for longer. If that guard fired his .45 automatic, there would be a lot of deaf people. Albeit, the supressor quiets it, i imagine that it would still be fairly loud. -Winchester

Not a Remington Model 7?

EDIT: The rifle used by Banderas is certainly NOT a Remington Model Seven. Without a doubt, the model used in the film is built on an Interarms Mark X Mauser-type action. Notice that the floorplate has a push button release that's clearly visible in photo noted below - that's the giveaway. It's likely that this is a Mini Mauser X action as this feature is most common on those (.223 cal is one of the common chamberings). Remington markets this action now as the Model 799, though being introduced in 2006, the film-used gun would be an Interarms Mark X. The bolt is custom (based on the facets on the bolt handle) and lengthened, and the rifle is set-up as a take-down piece as can be seen by the release ahead of the floorplate. 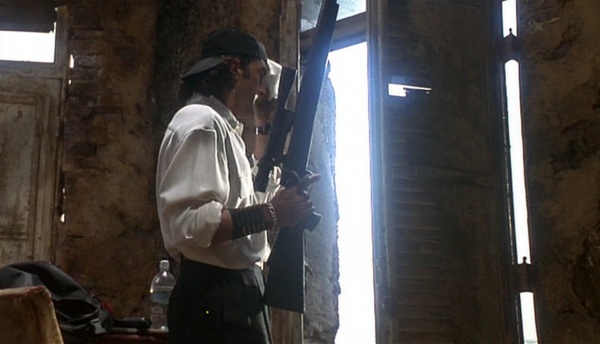 Bain stands at the window with his Remington Model Seven.
Retrieved from "https://www.imfdb.org/index.php?title=Talk:Assassins&oldid=394893"