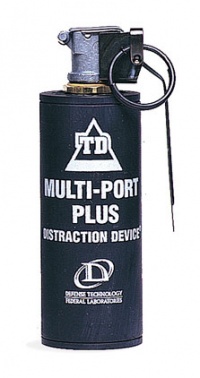 The TD Multi Port Plus Distraction Device is a rechargeable flashbang grenade produced by American company Defense Technology. It is considered to have the most powerful pressure wave among flashbang grenades because of its contents: 15 grams of flash powder which offer the dynamic explosive content, producing a report and pressure wave stronger than other flashbangs.

The TD Multi Port Plus Distraction Device and variants can be seen in the following films, television series, video games, and anime used by the following actors: