Sweat is a 2002 French road movie directed by Louis-Pascal Couvelaire. Four robbers have successfully stolen 10 tons of gold from a North African airport. As they race through the scorching desert in an old truck, 10 tons of gold turns out to be too tempting to share with each other.

The following weapons were used in the film Sweat:

Simon and Noh use a Llama IX-A pistol. This gun has smooth wooden grips, ventilated rib, slanted grooves on the slide, and a grip safety. 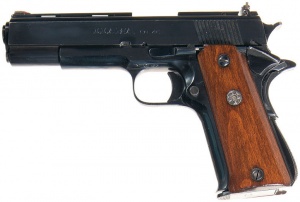 Simon fires his Llama IX-A at rocks and desert lizards

Good view of the Llama logo on the grip.

A Walther P38 is Victor's personal weapon. Harvey and Noh also use it

The Beretta M1951 is used by Victor and Harvey.

Harvey fires P38 and Beretta M1951 at a policeman.

The MAT-49 is used by police officers.

A policeman fires his MAT-49.

A sawn-off M2 Carbine with a ventilated metal barrel shroud appears in the hands of Grease-Monkey (Hubert Saint-Macary.)

A customized MG42 is mounted on a police off-road vehicle. This machine gun is equipped with a night vision camera for aiming in low-light conditions.

A view of the monitor rigged up to the MG42.

A sawn-off Mossberg 500 equipped with a flashlight is used by Beni (Thierry René) and Harvey.

Beni aims his Mossberg at Harvey