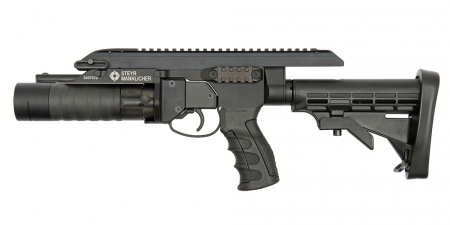 The Steyr GL 40 is a 40mm grenade launcher developed and produced by Steyr Mannlicher in Austria; it can be used as either an underslung launcher (mounted on the same company's AUG A3 and STM-556 rifles) or as a standalone weapon. Its barrel pivots to the side for reloading, rather like the Heckler & Koch AG36.

The Steyr GL 40 and variants can be seen in the following films, television series, video games, and anime used by the following actors: