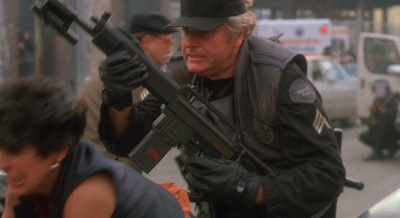 Steve Kahan as the LAPD Sergeant holds the Franchi SPAS-15 in Predator 2.

Steve Kahan is an American actor who is the cousin of director Richard Donner, who cast the actor in several his films, including Superman, Assassins, Conspiracy Theory and Scrooged. He is perhaps best known for his role as Captain Murphy in all four Lethal Weapon films, all of which were also directed by Donner.