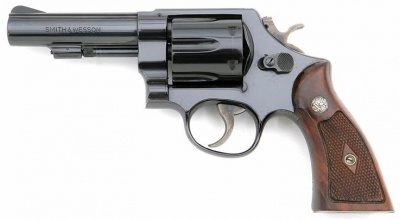 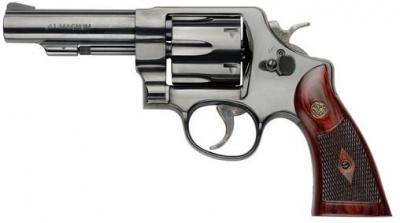 The Smith & Wesson Model 58 was the duty version of the Smith & Wesson Model 57. It is essentially the Smith & Wesson Model 10 on steroids. It was only available with the 4" barrel and fixed sights. The Model 58's small size and lighter weight (as compared to the Model 57 anyway) reflects the original intent for the .41 cartridge, to be a low-recoil option yet be more powerful than a .357 Magnum. The .41 ended up being made more powerful than was originally intended and, as a result, few policemen wanted to carry a gun the same weight as a .44 Magnum (the model 57), or a small gun that would be punishing to shoot with factory loads (the model 58). As a result, the model 58 was not very popular during its original run, used examples can now bring a respectable price. It was re-introduced by Smith & Wesson in 2008 as part of its Classic line of revolvers in bright nickel and bright blue finish. During the original run, its total production was 20,287.

The Smith & Wesson Model 58 and variants can be seen in the following films, television series, video games, and anime used by the following actors: