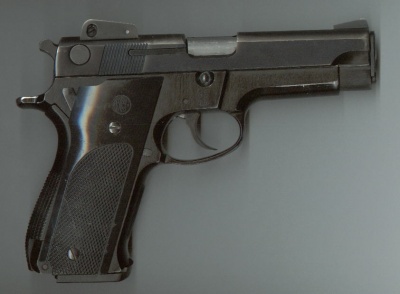 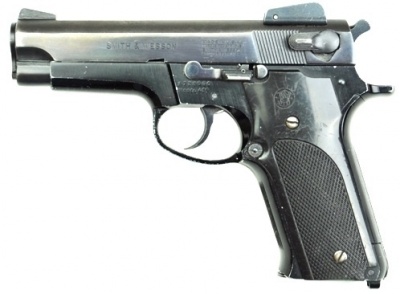 The Smith & Wesson 459 is the 2nd generation of the Smith & Wesson 59 (which is a double-stacked magazine version of the Smith & Wesson 39). The main notable external difference between the 459 and the 59 was adjustable rear sights (and a slight modification to the front sight to accommodate the higher profile of the newer rear sights). However, 459's could be ordered with fixed sights as well. The only other external difference is a single pin placement on the right side of the frame, the slide stop pivot pin (it appears behind the frame bulge on the 459, but ahead of it on the older 59, where the bulge is further back). Early production models have a round trigger guard, while later models have a square trigger guard. It was only in production for eight years, being again replaced by a later generation of S&W 9mm automatic handguns, the 5900 series. The S&W 459 has an all blued steel counterpart called the S&W 559 and a stainless steel version known as the Smith & Wesson 659. The pistol was used by the Federal Bureau of Investigations (FBI) for many years. The model was highly thought of by many of the agents who carried it. A handful continued to carry it until the FBI transitioned to the .40 S&W Glock 22 in 1997 and they were ordered to switch.

The Smith & Wesson Model 459 can be seen in the following films: