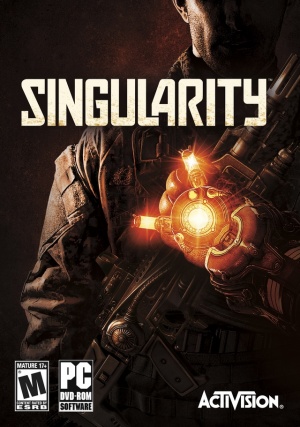 Singularity is a science-fiction first person shooter video game developed by Raven Software and published by Activision in 2010 for the PC, Xbox 360, and PlayStation 3.

The game takes place on a fictional Russian island called Katorga-12, once home to a research base which developed technology using the mysterious "Element 99." The player character, Captain Nathaniel Renko, is part of a US task force sent to investigate reports of strange activity on the island, soon found to be a result of the time-altering powers of Element 99. Armed with a prototype "Time Manipulation Device," Renko finds himself travelling between the active facility of 1955 and the shattered ruin of 2010 as he tries to piece together the details of an accident that occurred as he arrived, which led to an altered timeline where the Soviet Union annexed the entire world.

The following weapons appear in the video game Singularity:

Singularity uses the typical two-weapon system for the player's inventory, with the choice of a revolver, assault rifle, sniper rifle, shotgun, grenade launcher, railgun, and a GAU-19-inspired three-barrel rotary gun incorrectly identified as the "autocannon". In addition, there are two "special" weapons, a command-guided projectile rifle called the "Seeker" and a SACLOS rocket launcher, which can be picked up and carried as a third weapon but will be discarded if the player switches weapons. All of the player-used armament consists of fictional "Frankenguns" which are hybrids of numerous modern weapon parts embellished with "high tech" additions such as exposed cables and rotating turbine-like contraptions, while all the real guns in the game are used only by enemies or other NPCs.

The game allows player-used weapons to be upgraded to increase their damage, reload speed or magazine size; predictably, the latter is incorrectly called "clip size".

A First-Generation SCAR-H CQC is used by Devlin in the game. He can be seen holding it during the flight towards Katorga-12. It is the one and only time the SCAR-H CQC can be seen in the game; by the time Devlin is encountered again, he has apparently lost this weapon and is instead carrying the game's fictional "AR9 Valkyrie," a futuristic AK-type assault rifle. 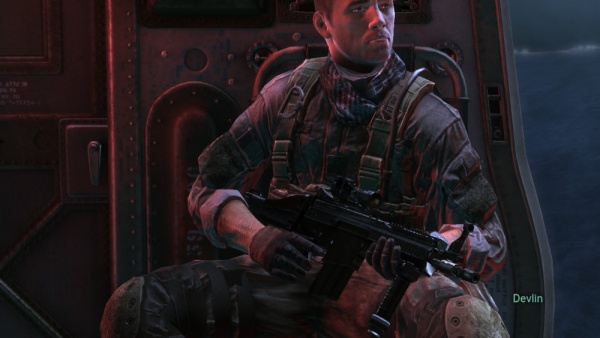 Devlin holding his SCAR-H CQC in the helo. The exacs same model can be seen in Raven Software's previous title, X-Men Origins: Wolverine. 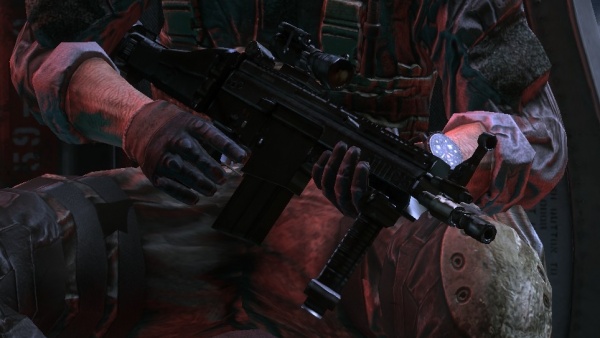 A closer look at the SCAR-H CQC.

Soviet soldiers guarding the 1955 version of Katorga-12 are equipped with ordinary AK-47 assault rifles as their standard armament, rather than the fictional "AR-9 Valkyrie" variant seen in the 2010 facility. 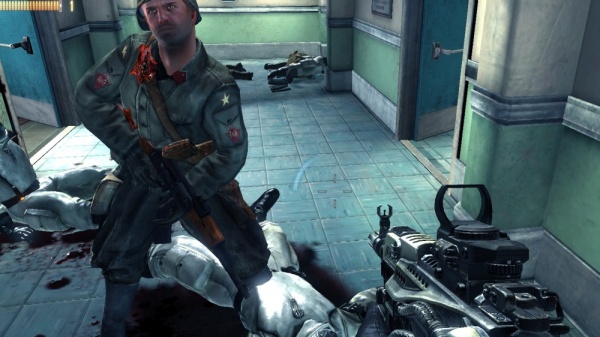 The battle of existing and fictional AK variants: The guard holds an AK-47 while Renko is armed with an "AR9 Valkyrie," a futuristic AKM-pattern rifle covered in various elaborate furnishings and silly gadgets that uses standard AK magazines. 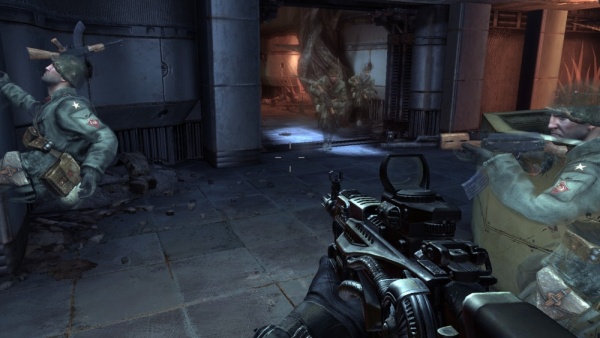 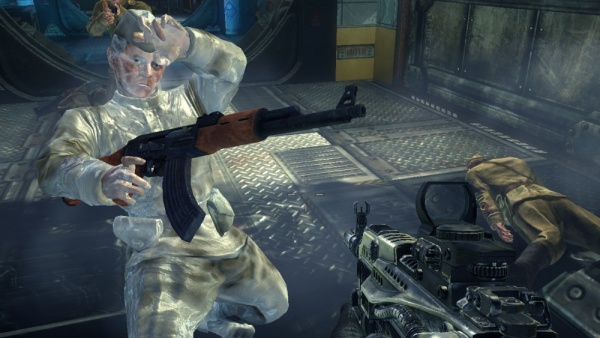 Makarov PM pistols are occasionally seen in the hands of Soviet guards in the 1955 facility, mostly as the standard weapon of riot shield soldiers. The Makarov can also be seen in the hands of one of the survivors of the Katorga-12 disaster in a "ghost" flashback in 2010. Killing riot shield enemies will have them drop ammunition for the fictional "Centurion" revolver; odd to say the least, considering the Centurion is reloaded by replacing the entire cylinder and it's doubtful that it uses 9x18mm ammunition. 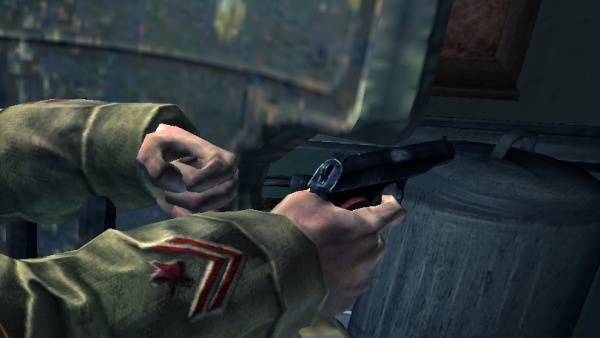 A Russian soldier with a Makarov PM. 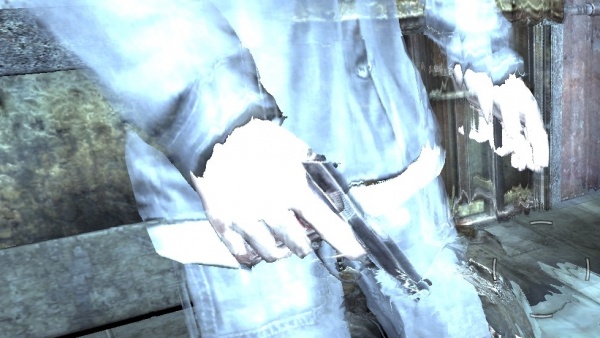 A ghost holds a Makarov as Renko witnesses the downfall of Katorga-12.

Demichev carries a Smith & Wesson Model 629 Classic revolver (with a Model 29 grip) with him in both the past and present; given the model in both time periods is exactly the same, this does rather imply he's been hauling the same revolver around with him for 55 years, including the 23 years in which the Model 629 didn't actually exist yet. 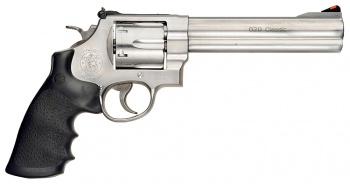 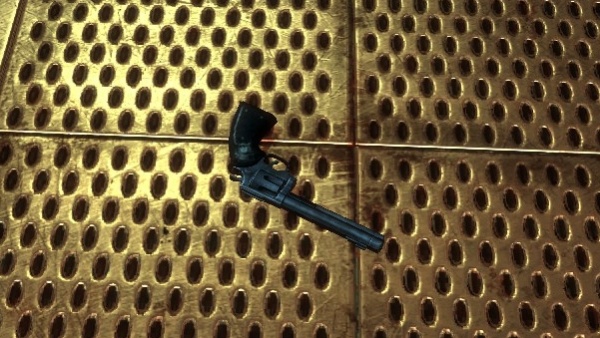 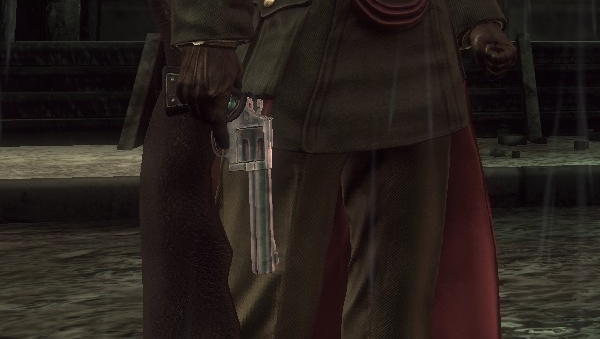 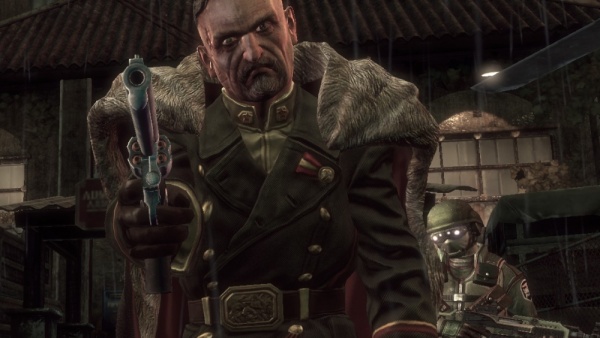 "Name, rank and serial number... that's all you get from us, Ivan."

Soviet soldiers guarding in 1955 the Katorga-12 facility use the the Winchester Model 1897 "Trench Gun" rather than the fictional "Volk S4" that enemies in the present use. The soldiers are never seen pumping or reloading the shotgun; the former is most likely due to recycling the animations for the semi-automatic Volk shotgun. Their appearance is somewhat contrived, because the Soviet Union and most of the other powers of the time did not officially use shotguns in their military; although there is some evidence that they were sometimes used by second-line troops, it would still be ordinary field shotguns, not the "trench" version. In addition, the much more common Winchester Model 1912 would be a more appropriate choice. 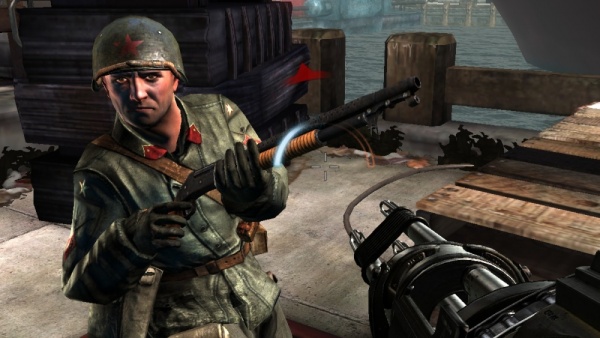 The M197 Vulcan can be seen mounted on Russian helicopters in the present-day facility. 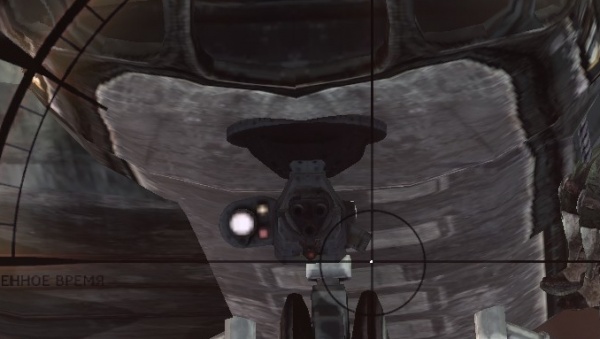 Vulcan on a chopper.

An unknown fragmentation grenade is used by Soviet soldiers in 1955. 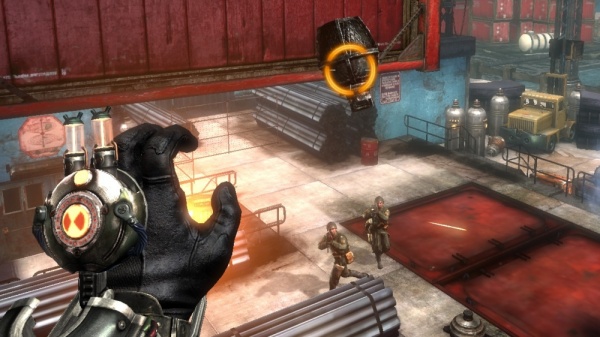 Renko uses the Time Manipulation Device to grab the grenade the Russians threw at him.

NOTE: All the fictional weapons use energy extracted from E99. This explains their somewhat unusual properties.

The "Centurion Pistol" is a powerful, six-shooter, double-action revolver. Its design appears to be entirely fictional, generally taking cues from the MP-412 REX, Mateba Autorevolver, and other modern combat revolvers. It's also worth noting that it specifically has Pachmayr grips. It uses an unusual reloading system, replacing the cylinder entire (which also seems to be automatically extracted after emptying).

"AR-9 Valkyrie" is a futuristic assault rifle, built on the basis of the AK and equipped with a shortened barrel, right folding FN SCAR-style stock, and red dot sight. It uses standard 30-round capacity 7.62x39mm AK magazines. 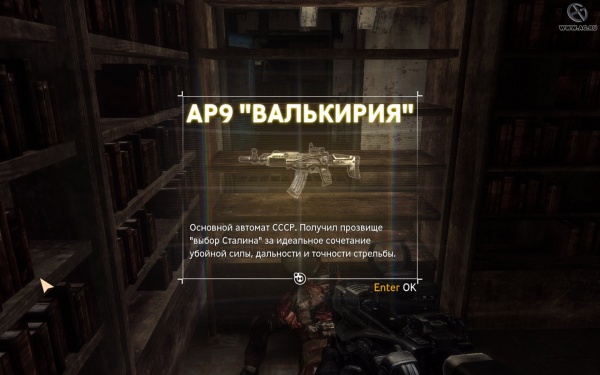 Brief description of AR-9 Valkyrie in the Russian version of the game (translation: The main assault rifle of the USSR. Was nicknamed "Stalin's choice" for the perfect combination of killing power, range and accuracy of fire). The magazine's curvature is more in line with a 5.45x39mm version. 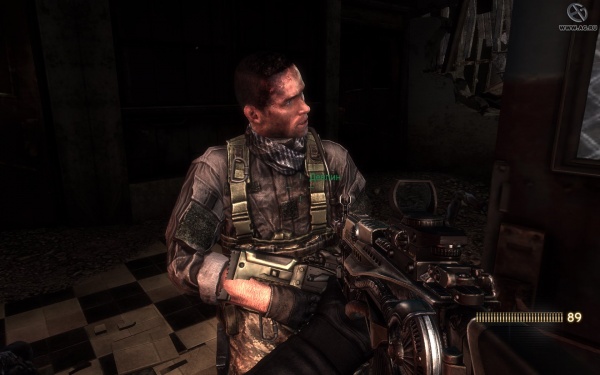 AR-9 Valkyrie can be seen in the hands of Devlin and the protagonist.

The "Volk S4" ("Wolf S4" on Russian language) is a fictional semi-auto shotgun. Its design resembles a Remington 870 shotgun. The Volk S4 also appears with an extended magazine tube, but feeds from detachable box magazines in the style of the Maruzen CA870 CQB airsoft gun (which holds 6 rounds by default, despite the fact that it is clearly still too tiny for this). It also uses a movable forend for cocking, in the spirit of the SPAS-12 and other dual-mode shotguns.

The "Kasimov SNV-E99 Sniper Rifle" is a semi-automatic sniper rifle. Its design resembles the Barrett M82-series rifles (albeit with an AK-style side cocking handle and safety).

The "RLS-7" is a single-shot rocket launcher, capable of firing rockets in either unguided or guided modes. Its design vaguely resembles that of the Armbrust ATW with the trigger group taken from the bottom half of the GM-94.

This pistol, apparently based on the Beretta M9, appears as "M9A7 Pistol", with attached flashlight. It available only as a secondary weapon in multiplayer. Originally, it was supposed a starting sidearm, but later in development, the beginning of the game was changes to more of a survival horror style, and M9A7 was replaced by the Centurion, a revolver that is much trickier to use.

AKMSU rifles with black furniture and telescopic M4-style stocks are seen in the hands of Russian soldiers in pre-release screenshots (in segments of the alternative 2010). Curiously, during the development process, the model was changed - the later version received a fixed stock, a dioptric sight, and a shorter magazine. In the final version, the AKMSU was lastly replaced by the "Valkyrie", a futuristic rifle powered by the E99 element (which is similar to the AKMSU, albeit with a number of sci-fi embellishments), but the original unmodified version can still be briefly seen in one of the game's endings. 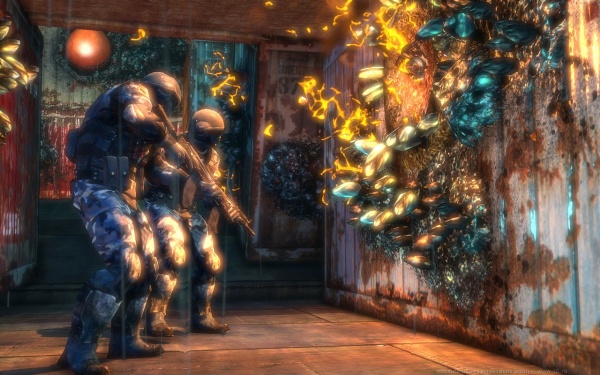 AKMSUs seen in the hands of Russian soldiers in an early pre-release screenshot. 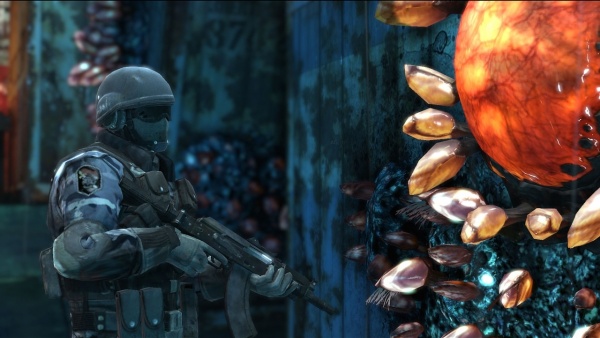 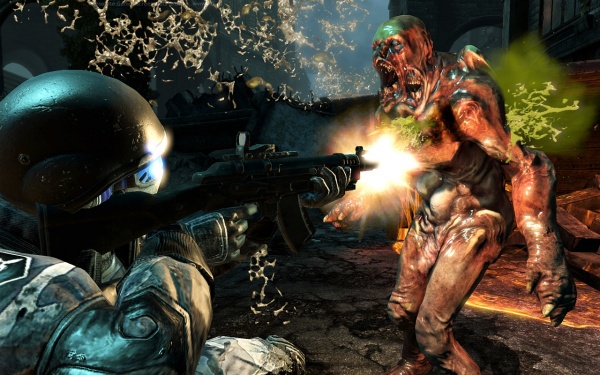 The soldier fires the rifle at a mutant. This is a later version of the model, fitted with a shorter magazine, which appears to be a 20-round 5.45x39mm magazine. Also note the backwards-mounted reflex sight. 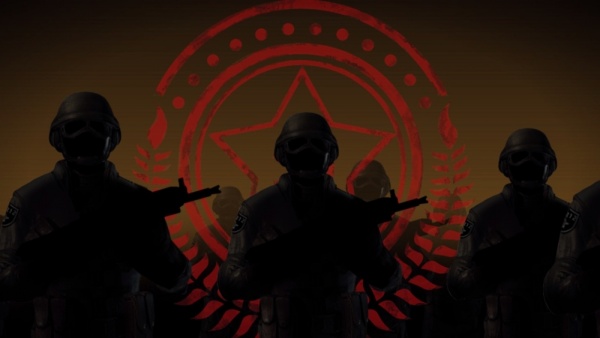 Russian soldiers with AKMSUs in one of the game's endings.

In early preview screenshots, Soviet soldiers were rather mysteriously armed with the Sturmgewehr 44 rather than the AK-47 they use in the final version. Precisely why is unclear; the AK-47 was available in 1955 (though mass production had not fully settled until 1956) and even if Katorga-12 had not been issued it yet, Russian soldiers would be using SKS rifles or PPSh-41/PPS-43 submachine guns, not rare and notoriously delicate WWII-vintage German weapons. 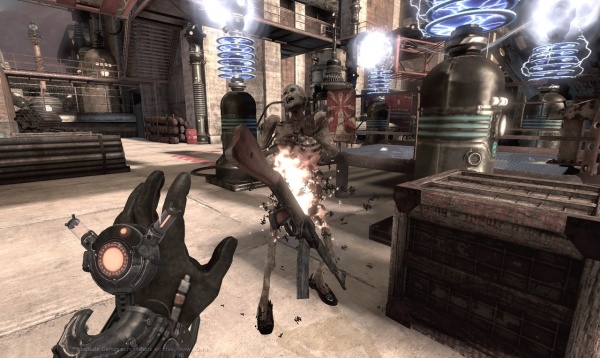 Angered at the Soviet soldier's poor choice of weaponry, Renko reduces him to a pile of bones with his time powers. 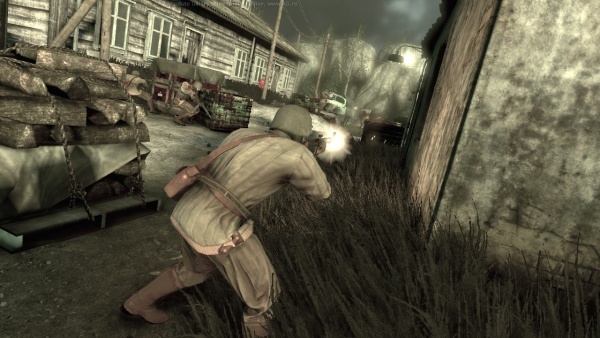 Soviet soldiers are seen with StG-44.
Retrieved from "https://www.imfdb.org/index.php?title=Singularity&oldid=1437759"
Categories: