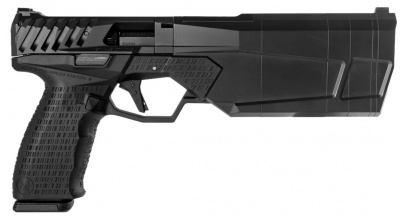 The SilencerCo Maxim 9 is an American integrally suppressed 9x19mm pistol manufactured by the SilencerCo company, who are known primarily for manufacturing suppressors. It was designed to be an integrally suppressed pistol compact enough to be holstered, but remain safe to shoot without hearing protection. It can also be configured to be shorter and the manufacturer states it is safe to fire subsonic ammunitions without without hearing protection in its shortened configuration.

In 2019, SilencerCo unveiled a version of the Maxim 9 that lacks a suppressor and thus can be purchased in the US without having to receive approval from the Bureau of Alcohol, Tobacco, Firearms and Explosives, which is required to purchase a suppressor in the United States.