Sentinelle is a 2021 French action movie directed by Julien Leclerc. Klara (Olga Kurylenko) is an interpreter in the French Army. After experiencing the horrors of war in Syria, she was transferred to Nice as part of Opération Sentinelle. There, with her mother and her sister Tania, she tries to rebuild herself. But one evening, after going to a nightclub, Tania is found half-dead, having been raped and severely beaten. Klara will then do everything to find the attackers and avenge her sister. This merciless hunt will lead her in the footsteps of Yvan Kadnikov, the son of a powerful Russian oligarch of the French Riviera.

The following weapons were used in the film Sentinelle:

During her service in Syria, Klara (Olga Kurylenko) carries a Beretta 92FS, possibly standing in for the PAMAS G1.

Klara (Olga Kurylenko) tries to draw her pistol before a suicide attack.

French soldiers are armed with the Glock 19, as opposed to the larger Glock 17 used by the real French Army. Klara steals a few from the military armory when she sets off for revenge.

Klara (Olga Kurylenko) draws her Glock on a drug dealer.

She draws a Glock on the armorer when stealing weapons.

What appears to be a SIG-Sauer P226 is seen in the armory.

The P226 is seen clamped upside-down in a vise.

Various FAMAS variants are seen. In the opening credits, real soldiers are seen with the FAMAS FÉLIN and FAMAS Valorisé. Klara (Olga Kurylenko) carries a G1 version when on duty in Nice. The G1 rifle is clearly a Tokyo Marui airsoft rifle. In Paris, she is carries an F1, as do other French soldiers.

Klara with her FAMAS F1 at the ready.

Klara observing people through the scope of her FAMAS G1.

When she removes her hand from the chamber, we can clearly see that this is a fake FAMAS. 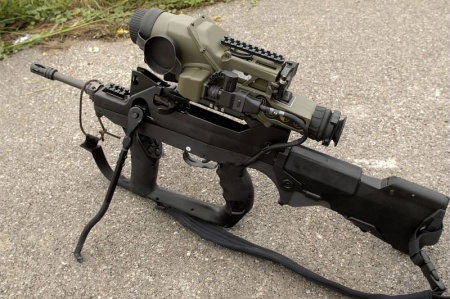 A stock photo of real French soldiers carrying the FAMAS FÉLIN and FAMAS Valorisé in the opening credits. Note the TOC (Témoin Obturateur de Chambre, empty chamber indicators) in the chambers that indicate the rifles currently do not have rounds chambered.

French special forces in Syria are equipped with FN SCAR-Ls as primary weapons with various accessories.

A soldier returns fire at a terrorist with a SCAR with ACOG sight.

Police entering the Russian house after the shootout. The rifles are equipped with sights and flashlights.

In Syria, terrorists are seen with AK rifles, but it is impossible to identify which models.

Terrorists in a pick-up are carrying AK rifles.

A French marksman in Syria protects the assault team with a Heckler & Koch HK417.

The marksman operates with a French sniper, equipped with what appears to be a Accuracy International Arctic Warfare- likely an airsoft replica.