The following weapons were used in the film Samurai Avenger: The Blind Wolf:

The Truck Driver (Kyle Ingleman) uses a Glock 17 in the film's opening. 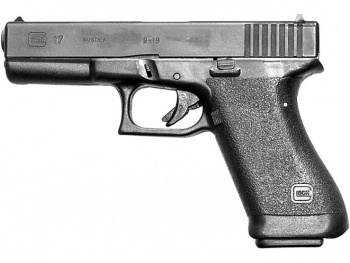 The Truck Driver charges his Glock.

The Truck Driver raises the Glock (here, it is obviously a prop that has been previously sawed in half)...

...but Blind Wolf (Kurando Mitsutake) cuts it in half with his katana.

...and fires it. Note the empty casing (circled in red).

Numerous unknown pistols can be seen on the gun rack at the prison.

Numerous pistols are seen at the left.

Another view of the same guns. The Prison Officer (Maxx Maulion) holds a rifle (at the background, right).

A Smith & Wesson Model 3 is Cowboy Gunman 2's (Jonathan Legg) firearm of choice. Upon closer inspection, it turns out to be a Denix non-firing replica.

Cowboy Gunman 2 with the holstered revolver.

...and cocks it. The modern light-alloy black screws are visible.

Cowboy Gunman 3 puts his hand on the grip...

Cowboy Gunman 1 with the holstered Colt.

Cowboy Gunman 3 cocks his Colt. The rough fit and metal that looks like a modern alloy rather than real old steel clearly indicates that this is another Denix replica.

Cowboy Gunman 3 accidentally fires the gun into the air.

A Mossberg 500 can can be seen on the gun rack at the prison.

A Winchester rifle is seen during the opening credits.

Cowboy Gunman 1 with the replica Winchester in his hands. Cowboy Gunman 2 (at the left) carries a holstered Smith & Wesson Model 3 replica.

The hammer can be seen.

A close view of the receiver. The material quality, the lack of an M1873's protruding plate, and the position of the screws make it a Denix M1866 replica.

The Prison Officer's (Maxx Maulion) duty firearm is an Arisaka Type 38 (a rather strange choice for an American law enforcement officer).

The rifle is seen near the table.

The Prison Officer aims the rifle at Nathan Flesher.

Note the groove on the stock.

His rifle can be seen from the other side.

The buttstock and bolt handle can be seen.

Rifleman (Masami Kosaka) possesses an Accuracy International AW. The rifle is actually a common airsoft replica, identifiable by its thicker barrel with no muzzle device, lack of protruding magazine or finger notches on the magazine well, and "chrome" bolt visible through the ejection port.

Rifleman puts his weapon on the ground.

The scope can be perfectly seen.

...and puts his finger on the trigger.

Rifleman aims the rifle. Note the lack of a magazine or finger cuts on the magazine well and the incorrect "chrome" look to the bolt through the ejection port.

A closer view of the trigger guard.
Retrieved from "https://www.imfdb.org/index.php?title=Samurai_Avenger:_The_Blind_Wolf&oldid=1426286"
Categories: