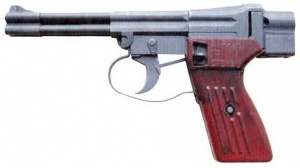 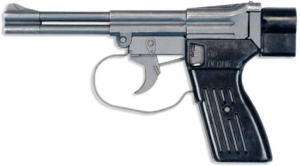 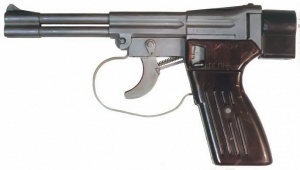 The SPP-1 Underwater Pistol (СПП-1, Специальный подводный пистолет, "Special Underwater Pistol") is a four-barreled Russian underwater pistol designed by TsNIITochMash and produced by TOZ. Originally designed in late 1960s, it was used by Soviet frogmen and is still used by modern Russian frogmen. The gun operates in DAO, where the striker is mounted on a rotating base and cocked and rotated to the next of the four barrels upon firing. Its ammo are long steel rods in 40mm long rimmed bottlenecked cases.

An improved variant known as the SPP-1M is made. It was described by multiple sources that the 1M model features an extra spring above the sear to improve the trigger pull and an expanded trigger guard, but multiple images existing online show that enlarged trigger guards already existed for SPP-1 models, and it appears that what was actually modified was the trigger.

The SPP-1 Underwater Pistol and variants can be seen in the following films, television series, video games, and anime used by the following actors: