Ryan's Daughter is a 1970 British romantic drama directed by David Lean. Screenwriter and frequent Lean-collaborator Robert Bolt had originally intended to adapt Gustave Flaubert's Madame Bovary with his wife Sarah Mills as the title character, but Lean wanted to try a different setting, changing the setting to Ireland in the wake of the 1916 Easter Rebellion. It did retain Sarah Mills as the title character however, joining Robert Mitchum, Trevor Howard, John Mills, Leo McKern, and Christopher Jones.

Although the film was a hit at the box office, it was not a hit with the critics. Lean's previously three films, The Bridge on the River Kwai, Lawrence of Arabia, and Doctor Zhivago, were all huge hits and had won a combined nineteen Academy Awards, and he simply tried too hard to duplicate the scale now expected of him. The harsh conditions of the location shoot in Western Ireland and constant delays took its toll on the cast and crew. Christopher Jones, who had been cast without ever meeting Lean, had to have his dialogue reduced and whatever lines he did have dubbed because Lean had not realized that Jones had a relatively high-pitched voice. Difficulties between Jones and director Lean, and costar Sarah Mills, along with the brutal murder of his good friend Sharon Tate at the hands of the Manson family during filming caused Jones to effectively retire from acting. Likewise, Leo McKern was injured on set and took a short sabbatical himself. Lean was extremely hurt by the critical reception of the film and didn't direct another feature for fourteen years.

The film was nominated for four Academy Awards and won two. John Mills, who had no dialogue and was almost unrecognizable as "village idiot" Michael, won for Best Supporting Actor. The film also won the Academy Award for Best Cinematography, just like Lean's three previous films.

The following weapons were used in the film Ryan's Daughter:

The Corporal (Barry Jackson) and "Lanky Private" (Des Keogh) with their Lee-Enfields while on patrol.

The Corporal with his SMLE with bayonet affixed while Father Collins (Trevor Howard) scolds Major Doryan. 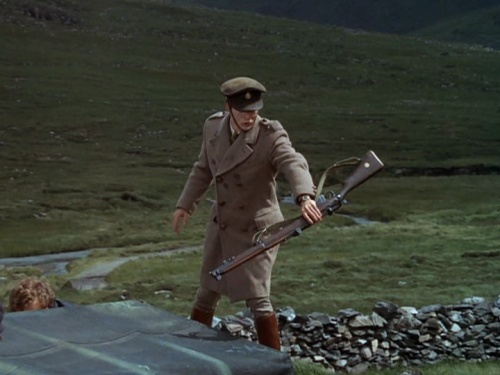 Major Doryan catches an SMLE. This is from a making-of featurette and is not in the final cut. (Hopefully he caught it on the first try.) 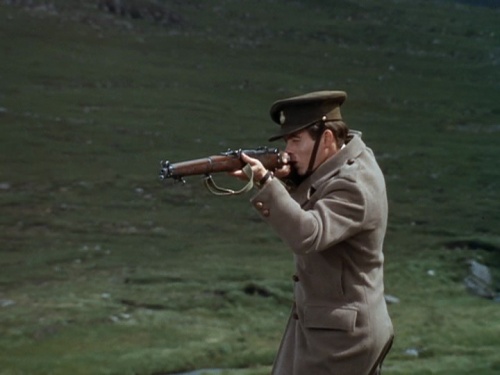 Major Doryan fires the SMLE. This is from a making-of featurette and is not in the final cut. Note that in the final cut, the chinstrap on his cap is not used and that he is wearing a trenchcoat rather than a wool greatcoat.

Tim O'Leary carries a Webley Mk VI. He hands it to Paddy (Philip O'Flynn) to subdue the constable, but later gets it back. Major Doryan later gets his hands on it.

O'Leary hands his Webley to Paddy.

A good shot of O'Leary's Webley at the ready.

Major Doryan points O'Leary's own Webley at him.

Major Doryan with his own Webley during a PTSD-induced flashback. 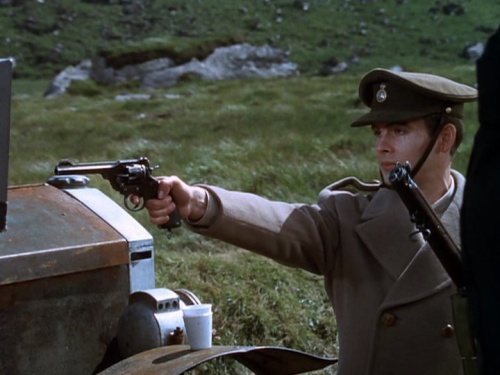 Major Doryan with his Webley during what appears to be rehearsal. As with above, his costume is different than in the final cut, and there's a paper cup on the truck's fender.

Included in the German weapons shipment are some Mauser Gewehr 1898 rifles. In a continuity error, the Lee-Enfields carried by O'Leary's rebels turn into Gewehr 1898s prior to them receiving the shipment.

O'Leary's men with their slung Mausers. They had previously been Lee-Enfields.

A village woman carries a pair of Gewehr 1898s. The Lange-Visier rear sight is visible here.

Most of the rifles in the Germans weapons shipment are older Mauser Model 1871 rifles.

O'Leary carries a few rifles to his truck.

Michael (John Mills) in his boat with a few Gewehr 1871s. Note the channel milled into the underside of the stock for the Gew.71's cleaning rod.

Doryan with one of the Mausers.

The Germans also send Model 17 Stielhandgranates to the Irish rebels.

Michael with enough grenades to reduce his rowboat to splinters.

Michael hands Doryan one of the potato mashers.

The British troops are equipped with at least one Lewis Gun.