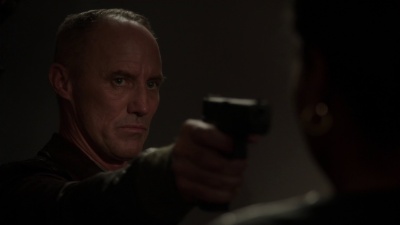 Robert John Burke as Officer Simmons holds a Glock 17 in Person of Interest.

Robert John Burke is an American actor who is known to film audiences for taking over the role of Murphy/RoboCop in 1993's RoboCop 3. On television, he is often cast in law enforcement or military roles, having portrayed NYPD officers in the series Law & Order: Special Victims Unit, Person of Interest and Blue Bloods. He also portrayed General James Mattis in the HBO miniseries Generation Kill.