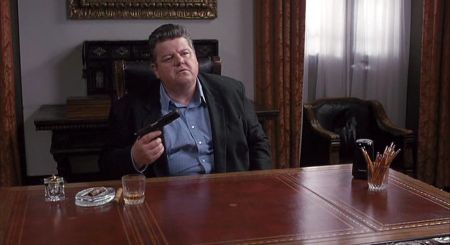 Robbie Coltrane fires a Heckler & Koch MP5K as Valentin Zukovsky in The World Is Not Enough (1999).

Robbie Coltrane (1950–2022) was a Scottish actor/comedian/writer well known to movie audiences for his role as Rubeus Hagrid in the Harry Potter feature film series as well as Valentin Zukovsky in two James Bond feature films (GoldenEye and The World Is Not Enough). He also appeared in such films as The Brothers Bloom, Nuns on the Run and 1998's Great Expectations in addition to appearing as Dr. Edward Fitzgerald in the UK series Cracker. He passed away on October 14, 2022, at the age of 72.