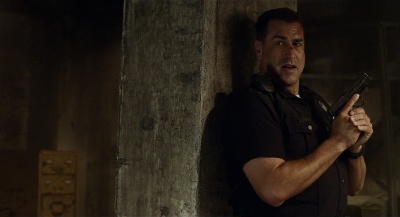 Rob Riggle with a SIG-Sauer P226 as Officer Segars in Let's Be Cops.

Rob Riggle as Mr. Walters with a two-tone SIG-Sauer P226 in 21 Jump Street.

Rob Riggle is an American actor/comedian and former United States Marine who served in Liberia, Kosovo, and Afghanistan. He went on to become a cast member on Saturday Night Live and a correspondent for The Daily Show as well as appearing in such films as The Hangover and 21 Jump Street.