The following weapons were used in the film Red Billabong:

Another view of Mr. Richards aiming his pistol.

Richards' Man (right) holds the carbine. The magazine for 9x19mm is visible.

A close view of the muzzle shows no flash suppressor, which is characteristic for the 9x19mm variant of the T2 Mk5 Semi-automatic Carbine.

A D-Technik Sa vz. 61 sporting pistol is seen on a shelf in Mr. Richards' workplace. 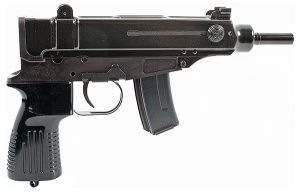 A machine pistol on a shelf.

A Heckler & Koch MP5K submachine gun is seen on a shelf in Mr. Richards' workplace.

A submachine gun on a shelf.

Richards' Man #3 holds the rifle in an apparently reversed image.

Three rifles lean against the wall.

Jason (James Straiton) is seen with an SKS.

A Steyr AUG A1 Carbine is used by Richards' Man #2 (Damien Bryson).

An F88 Austeyr is seen in Mr. Richards' workplace.

A rifle leans against the wall.

Richards' Man is seen with an unidentified rifle.

An unknown rifle is seen.

Unknown rifles are seen, at far left and far right.

A Mossberg 500 with rifle sights is used by Nick (Dan Ewing).

A net gun is used by Richards' Man.