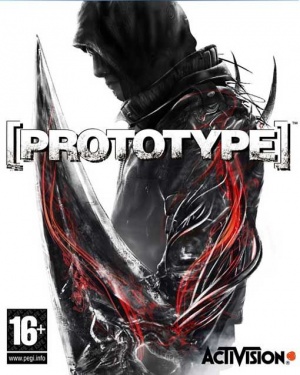 Prototype (stylized as [PROTOTYPE]) is an open-world third-person action game developed by Radical Entertainment and published by Activision for Windows PC, PS3 and Xbox 360 in 2009 and for PS4 and Xbox One in 2015. The game builds on Radical's earlier game The Incredible Hulk: Ultimate Destruction. There is some speculation that it was intended to be a game about the Spider-Man villain Carnage, but that a license could not be acquired.

Set in Manhattan, the game takes place over the course of 18 days and charts the outbreak and spread of a deadly virus known as Blacklight, which mutates humans into hideous, mindless monsters and turns buildings into hives spewing out contaminants. The player takes the role of a mysterious amnesiac, Alex Mercer (Barry Pepper), who awakes in a basement lab at the GenTek corporation with almost no memory of who he was and a seeming ability to control his infection, allowing him to shapeshift, access superhuman powers of regeneration, agility, speed and strength, and giving him the ability to consume humans to steal their shapes and even their skills and memories. Soon he finds himself hunted under the codename Zeus by a top-secret American containment force, Blackwatch, as he tries to piece together who he was and who is responsible for his current state.

The following weapons appear in the video game Prototype:

The M4A1 rifle is the basic weapon of the Marines and the Blackwatch soldiers. It's called Assault Rifle in game. Can, with total disregard to physics, hold 100 rounds of ammunition (when fully upgraded) in a regular 30-round STANAG magazine. 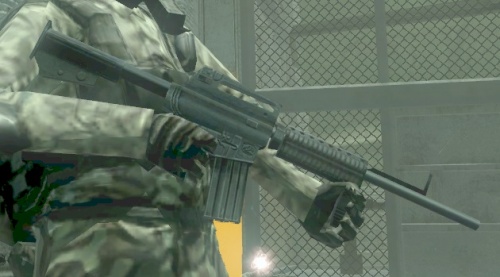 Blackwatch soldier with his M4A1

The M16A4 is used by Blackwatch soldiers in most of the cutscenes, but never seen in the actual game.

A MP5K in seen in a cutscene.

Called the "Machine Gun" in-game, the M249 provides a vast amount of firepower, but is incorrectly weaker than the Assault Rifle. Though it has slightly less power, it can hold much more ammunition, making it a better choice for long term use. In fact, when fully upgraded the M249 holds around 600 (!) rounds of ammunition in a drum that looks like it would barely fit a 100-round belt. 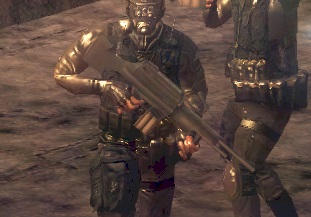 M249 SAW in hands of a Blackwatch soldier

The Milkor MGL Mk 1L grenade launcher is a useful weapon because of its range, power, and accessibility. Only instead of grenades, it fires miniature missiles, which fly in a straight path instead of in an arc. When fully upgraded, it holds 18 mini rockets. 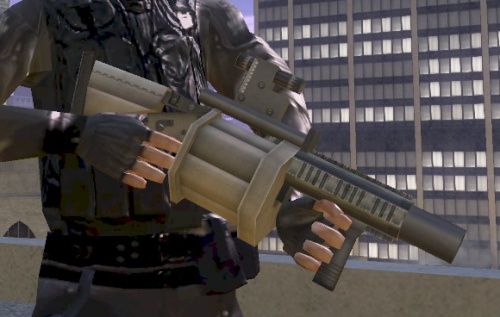 M32 MGL (sort of) in hands of a Blackwatch soldier.

A ridiculously mis-scaled Pansarskott m/86 is available as the "rocket launcher," firing lock-on guided rockets. It is meant to depict the FGM-148 Javelin based on its use and depiction in cutscenes.

Pansarskott m/86, Swedish Army version of the M136 AT4 with folding foregrip - 84mm 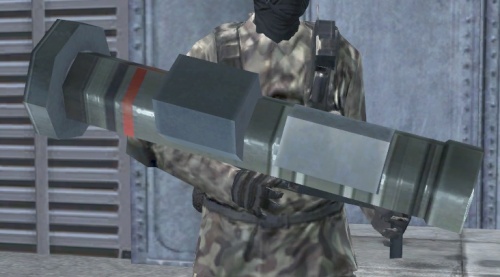 The Browning M2 is seen mounted on M1 Abrams tanks, in gunpods on Blackhawk helicopters, and incorrectly also on Bradley IFVs. Alex is not able to use the M2 on ground vehicles while driving, but enemy commanders will sometimes use it if Alex reveals himself near them.

An M1911A1 is seen used by a Blackwatch soldier in the introductory cutscene. It is technically usable by the player for less than three seconds if the player stealth consumes a police officer while he has the Colt drawn, unfortunately it disappears quickly for some reason. 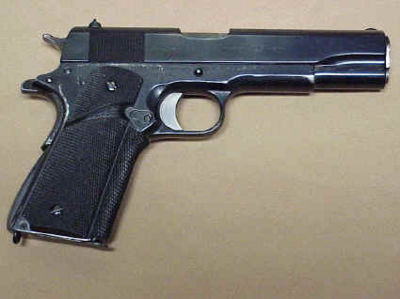 "Her too."
Blackwatch soldier about to shoot the survivor.

Seen in some of the cutscenes. 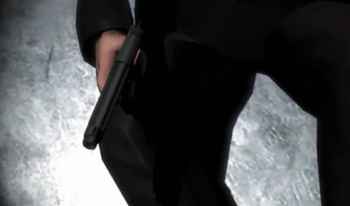 McMullen with his Beretta
Retrieved from "https://www.imfdb.org/index.php?title=Prototype&oldid=1212902"
Categories: