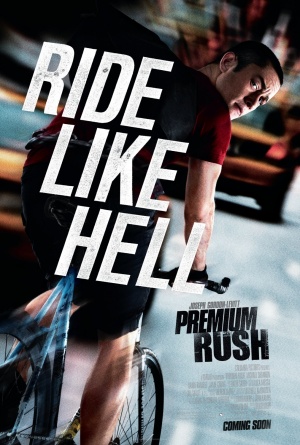 Premium Rush is a 2012 biking thriller co-written and directed by David Koepp starring Joseph Gordon-Levitt and Michael Shannon. The film shot on location in New York City, using many actual bike messengers as extras and in bit parts. While Joseph Gordon-Levitt did train extensively for the role, much of his riding was split up between four different stuntmen, one for speed, one for falls, and two just for tricks.

The following weapons were used in the film Premium Rush:

The Bike Cop (Christopher Place) carries a Glock 17 as his service weapon. Christopher Place is actually a professional stuntman, since the role was very physical and required multiple falls. Thus, his Glock is almost definitely a rubber stunt prop.

The Bike Cop with his holstered pistol.

"Sudoku Man" (Kin Shing Wong) uses a Magnum Research Micro Eagle at the end of the film. He uses his sudoku book as a makeshift suppessor. 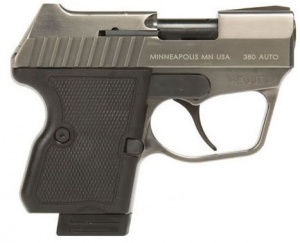 The Sudoku Man walks away with his Micro Eagle.

The sudoku book used as a suppressor, covered with Sudoku Man's fingerprints, left on the street.

Det. Bobby Monday (Michael Shannon) carries an unidentifiable Glock pistol as his service weapon. He only draws it once to pistol-whip someone, but it's very difficult to make out.

Det. Monday draws his pistol to pistol-whip someone.