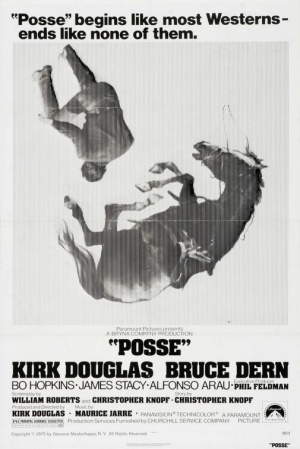 Posse is a 1975 Western directed by and starring Kirk Douglas as a politically ambitious US Marshal who leads an elite posse in tracking down a notorious outlaw (Bruce Dern).

The following weapons were used in the film Posse (1975):

The Single Action Army is used by several characters in the film including US Marshal Howard Nightingale (Kirk Douglas) and outlaw Jack Strawhorn (Bruce Dern).

The Winchester Model 1892 is used by members of both Nightingale's posse as well as Strawhorn's outlaws.

Wesley (Bo Hopkins) talks to the other Marshals, some of whom carry the Winchester.

The Winchester Model 1892 is used by one of Strawhorn's outlaws at the right.

The Winchester Model 1892 is used.

A rack of 12 Gauge Double Barreled Shotguns is seen in Nightingale's office.

A rack of 12 Gauge Double Barreled Shotguns is seen at the left in Nightingale's office.
Retrieved from "https://www.imfdb.org/index.php?title=Posse_(1975)&oldid=1316674"
Categories: