Pitch Black is a 2000 science fiction film that stars Vin Diesel as Riddick, a dangerous criminal who has a unique ability to see in the dark and upon crash landing on an alien world must reluctantly band with the survivors in order to escape the deadly lifeforms that inhabit the planet. The Riddick character would return in two sequels: The Chronicles of Riddick and Riddick. For some video releases, the film was retitled The Chronicles of Riddick: Pitch Black.

The following weapons were used in the film Pitch Black:

William J. Johns (Cole Hauser) uses a Armscor M30R6 with a folding stock and a shortened barrel. The shotgun has been modified to look heavy and short. Johns never unfolds the stock in the film. Riddick (Vin Diesel) also uses the shotgun. 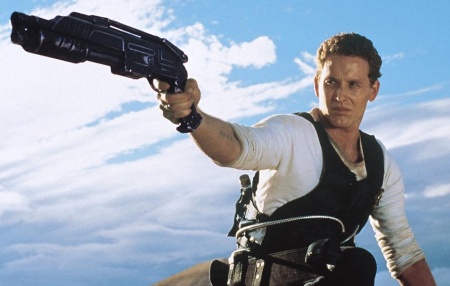 A promotional image of Cole Hauser as Johns with his modified Armscor M30R6. 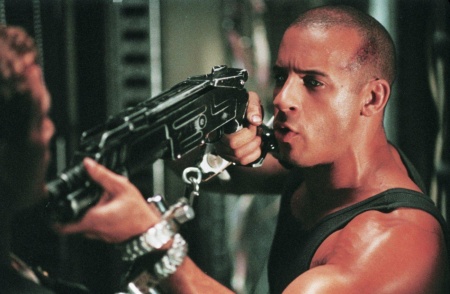 A promotional image of Vin Diesel as Riddick with the modified Armscor M30R6.

Johns takes his weapons out of the box. Note the folding stock.

Johns racks the action of his shotgun.

Close-up of the Armscor.

Riddick holds the shotgun on Johns.

Johns wields his futuristic shotgun as he and Riddick clear an area.

The light is mounted on the folding stock.

The Original GSP Prop Stunt Gun made by FX Illusions.

The GSP lies on the floor after the crash.

Johns takes his weapons out of the box.

Johns tucks the pistol in his pants.

Johns shows Zeke how to work the pistol, before handing it to him.

Zeke holds the pistol after firing it.