None But the Brave

The following weapons were used in the film None But the Brave:

Lt. Kuroki can be seen armed with a Late Style Nambu Type 14 pistol. This pistol is never shown being fired, but instead changes briefly to a Walther P38.

Late Nambu Type 14 in caliber 8x22mm Nambu, of the type carried by Lt. Kuroki in the film.

In some scenes Lt. Kuroki's Nambu Type 14 changes into a Walther P38. This is quite the achievement since the P38 is a German pistol. Although the P38 does look somewhat similar to a Nambu, it still looks quite different.

Some American marines use the M1911A1 pistols. Most notably this pistol seen used by Air Crewman Keller (Tony Bill)

The Smith & Wesson Victory Model seen in a chest holster

The M3 "Grease Gun" can be seen in hands of Cpl. Craddock and Sgt. Bleeker

The M1 Carbine is most notably seen in the hands of 2nd Lt. Blair 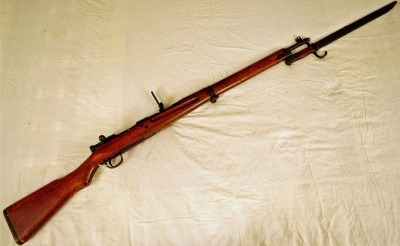 During the first shootout between Marines and Japanese soldiers Lance Cpl. Hirano used the Arisaka Type 38

The Japanese soldiers have at least one Type 96 light machine gun.