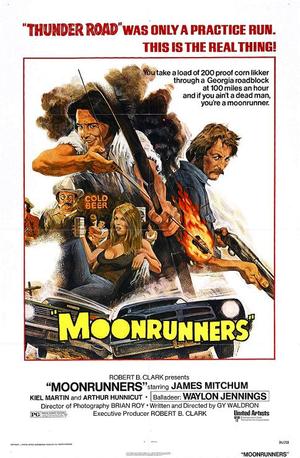 Moonrunners is a 1975 B-movie starring James Mitchum and Kiel Martin based on the life of moonshine runner Jerry Rushing, who also had a brief role in the film. Moonrunners was the precursor to The Dukes of Hazzard, featuring two cousins in the South who run moonshine for their Uncle Jesse despite a corrupt opposition in cahoots with Sheriff Rosco Coltrane. The film, like the show, also featured a plethora of car chases (and crashes) and the narration and music of outlaw country star Waylon Jennings. Most of the weaponry in the film is shotguns, with the exception of the cousins' bows.

Moonrunners was also considered to be an unofficial follow-up to the 1958 film Thunder Road, also starring James Mitchum and his father Robert Mitchum about moonshine drivers in the face of a larger syndicate and revenue agents. Compared to The Dukes of Hazzard and Thunder Road, Moonrunners was the most raw, featuring the most profanity and references to the cousins stepping outside the law to achieve their means. Filmed completely on location in Georgia and with the direct input of former "moonrunner" Jerry Rushing, it is considered to be a relatively accurate portrayal of moonshine running in the 1970s.

The following firearms can be seen in the film Moonrunners:

Revenue agents, including Fred (Ben Jones, later to play Cooter on The Dukes of Hazzard) fire Browning Auto-5 shotguns at the Hagg boys when raiding their still. 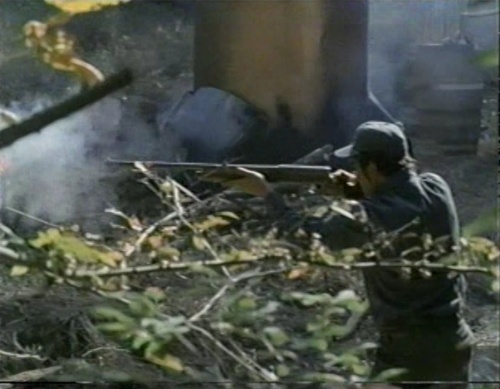 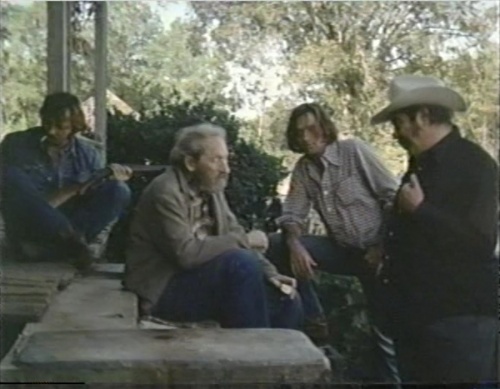 Grady holds his shotgun in the background. 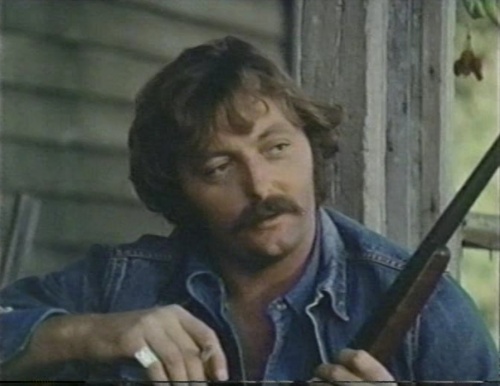 Grady with his shotgun.

Like their counterparts Bo and Luke on The Dukes of Hazzard, Bobby Lee Hagg (Kiel Martin) and Grady Hagg (James Mitchum) use bows with dynamite-tipped arrows to bring down their opposition, citing their use in the opening scene due to being probation. However, unlike the Dukes, Bobby Lee and Grady are not opposed to using shotguns for more illegal operations. 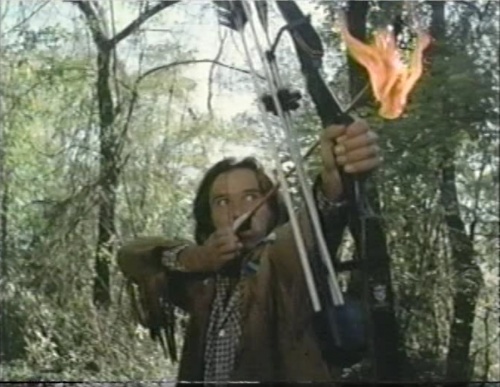 Bobby Lee aims his bow at one of Jake Rainey's stills. 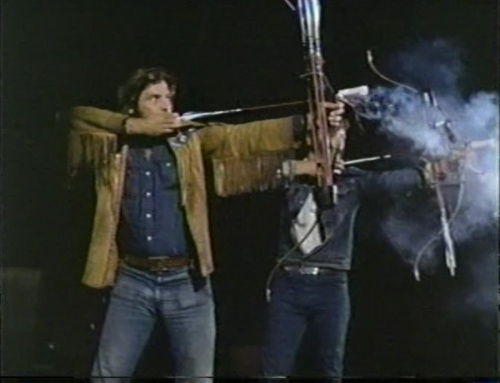 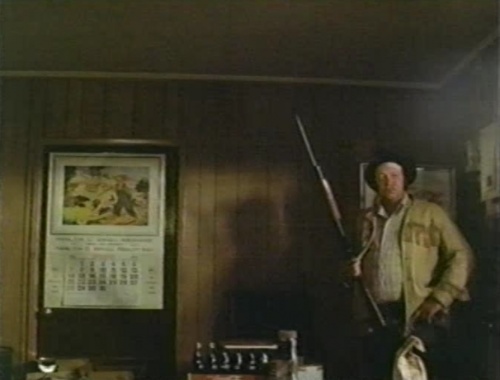 Jake's bodyguard with his shotgun.

Double-barreled side-by-side shotguns with exposed hammers are the weapons of choice for Rainey's men, including his guard (Jerry Rushing) at the warehouse. Zeebo (Pete Munro) takes the guard's sawed-off shotgun and uses it during the finale. 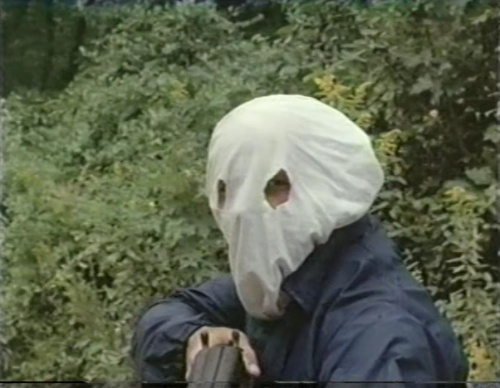 A hooded Rainey thug holds up the Hagg brothers' Plymouth. 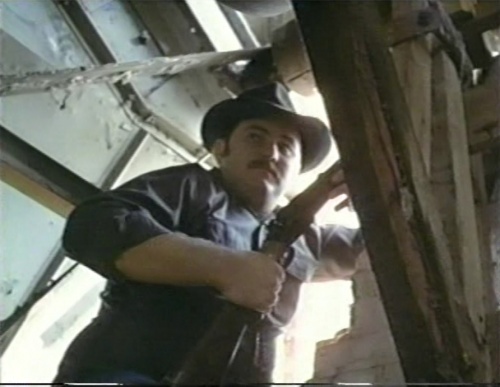 One of Rainey's thugs stands guard with a shotgun. 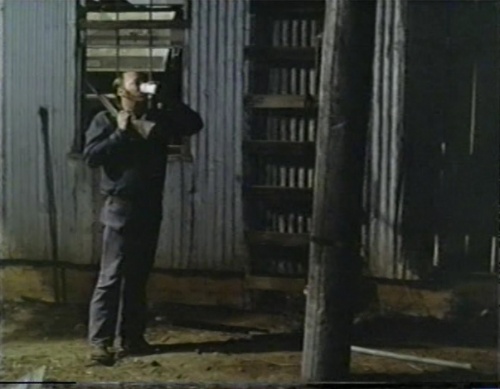 Rainey's bodyguard paces outside the warehouse with a shotgun and a Budweiser. 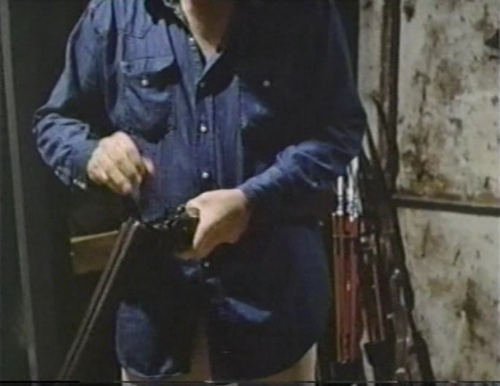 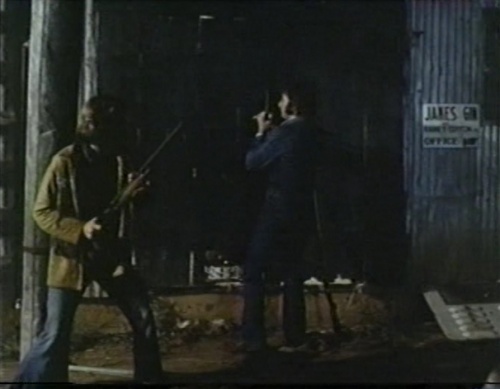 Bobby Lee, Grady, and Zeebo break into the warehouse. 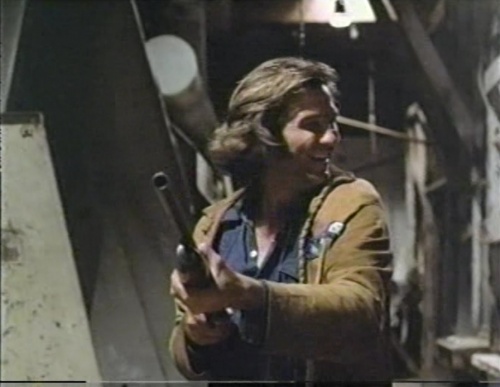 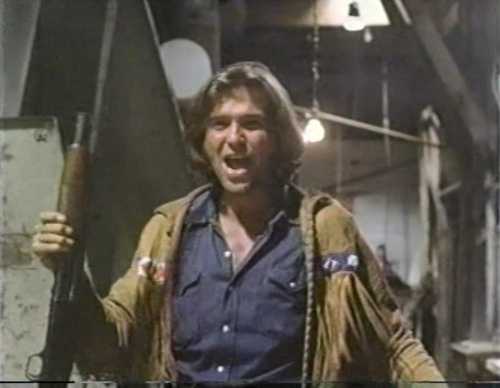 Bobby Lee tosses his Mossberg from hand to hand. 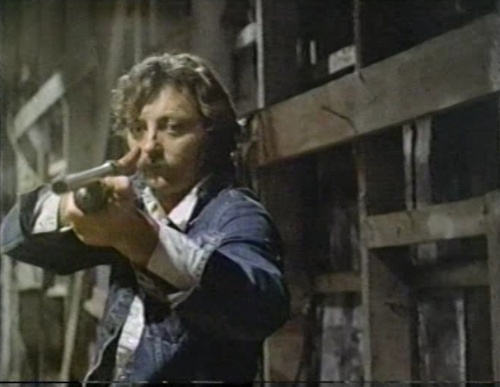 Grady aims at the moonshine.
Retrieved from "https://www.imfdb.org/index.php?title=Moonrunners&oldid=1377201"
Categories: