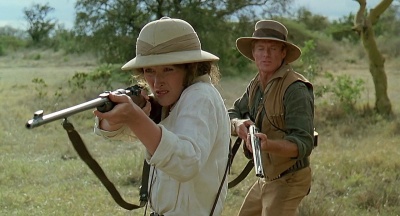 Meryl Streep holds a Westley Richards .318 Mauser Rifle as Karen Blixen in Out of Africa (1985).

Meryl Streep is an American actress well known for her numerous character roles, which has led her to a record 19 Academy Award nominations and three acting Oscars (two for Best Actress and one for Best Supporting Actress). Among the films she has appeared include The Deer Hunter, Out of Africa, Death Becomes Her and Postcards from the Edge.