Matrix: Path of Neo, The 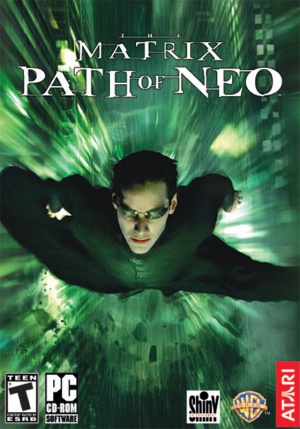 The Matrix: Path of Neo is a third-person shooter video game, written and directed by The Wachowskis. It was released in 2005 for the PC, Xbox and PS2. The game follows the epic, well-known story of Thomas Anderson becoming The One, however it also includes several levels that extend the storyline of the three films.

NOTE: The game includes footage taken directly from the Matrix films. The weapons seen in these cut-scenes are NOT included on this page.

The following weapons appear in the game The Matrix: Path of Neo:

The Heckler & Koch USP is the standard weapon of police officers and other various enemies. Trinity, and Switch also carry USP's. It is the first weapon Neo can obtain, therefore it is the weakest also. Can be dual-wielded for increased firepower. Called simply "Pistol" in the game.

A cop holds his USP on Neo during his rooftop escape attempt. The selector appears to be on safe.

A few USP's in a wooden crate.

A gangbanger takes aim at Neo during one of the early training sequences. According to the Wachowskis, they made this game not just to extend the storyline, but to include locations, and scenes that could not make it into the films. This firearms training is one of those scenes.

Trinity blows away an Agent with a USP. Interestingly, instead of "Dodge this." she says "You don't need this."

The Desert Eagle Mark XIX is mostly famous for being the weapon of choice for agents, but also seen on a few other enemies. The pistol's model has an extremely low overall quality, but the scope rail over the barrel can be seen when Neo wields it. This, and the non-fluted barrel confirms that it is chambered in .50 Action Express, just like the Desert Eagles used in all three films.

The Desert Eagle as in the majority of video games, is shown to operate in DAO. Can be dual-wielded, like the USP. Called "Agent Pistol" in-game. 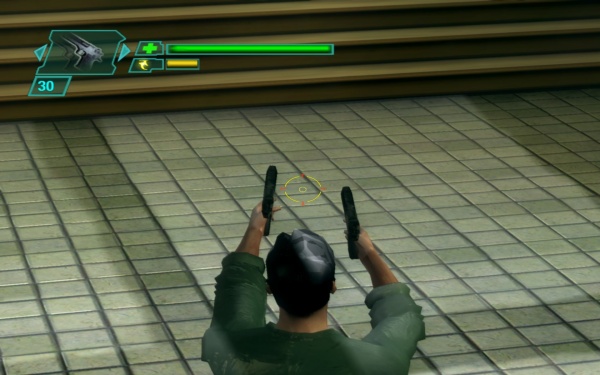 An Agent with a Desert Eagle Mark XIX after Neo dodging his bullets on the rooftop.

Agent Smith with his signature pistol.

An Agent threatens a retired police officer with his Desert Eagle. In real life, he could not fire the pistol, as the hammer is not cocked. Although, there is a possibility that the Desert Eagles inside the Matrix were programmed to operate in DAO.
Unrelated to this, a little more background info for those who might wonder why would an Agent try to kill a policeman: This section takes place between the first and the second films, and this former police officer is one of the few people, who were freed from the Matrix by Neo.

The Heckler & Koch MP5A3 with Navy lower and forend weapon-light is used by SWAT team members, gangbangers, and various other enemies. Can be dual-wielded and is called "Submachine Gun" in the game.

The gang leader pulls out his akimbo MP5's. 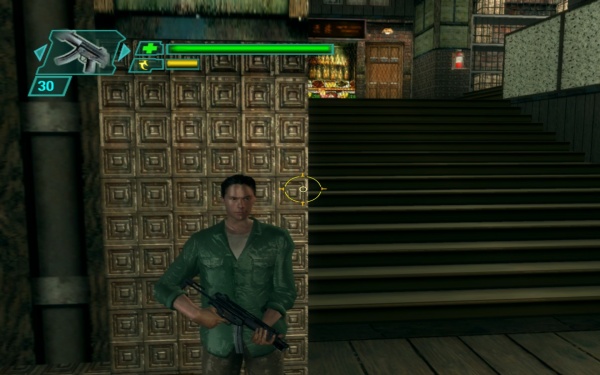 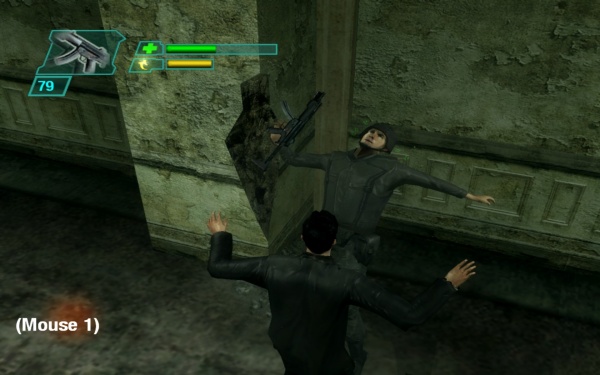 The M16A2 rifle is mostly seen carried by soldiers and SWAT members, but a few security guards also carry them. Morpheus and Trinity also use M16A2 rifles when SWAT cuts them off of their exit. Near the end of the game, Agent Smith replicas are also using M16A2's, and usually hold and fire them one handed. The gun is depicted to be fully automatic. Called the "Assault Rifle" in-game. 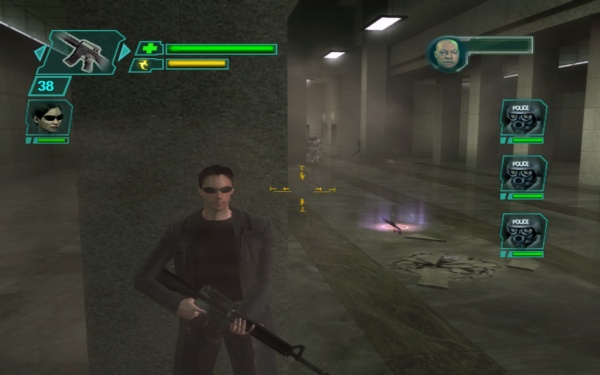 Neo takes cover with an M16A2 in his hands during the famous lobby shootout part of the game.

Trinity fights two guards on the rooftop. This screencap gives a good view of the A2 upper the rifle has. Also note the Thermold AR-15 magazine, usually found on Colt Canada rifles.

A guard prepares to open fire with his M16A2 rifle.

The Benelli M3 Super 90 is mostly used by on SWAT and military and is called the Pump Shotgun in-game. 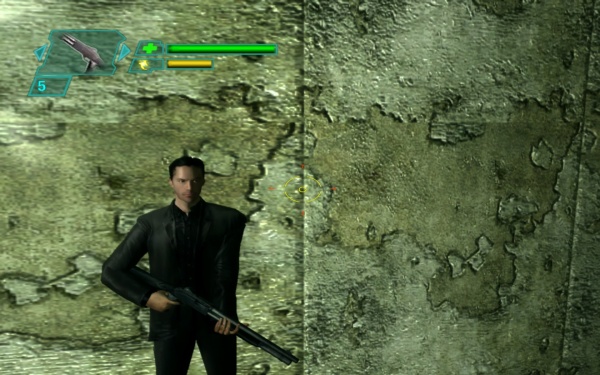 Neo with a Benelli M3 shotgun.

The 12 Gauge Double Barreled Shotgun is briefly seen used mostly by exiles. Can be dual-wielded. Due to a bug, there is no reload animation for this gun. 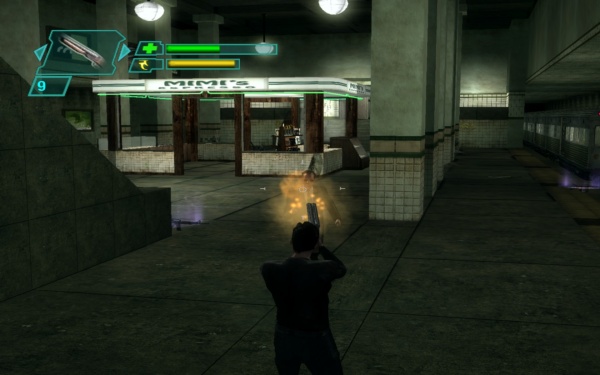 Neo tries to dispatch Agent Smith with a double barreled shotgun. This section of the game takes place after the subway fight but before the hotel chase scene (first film). 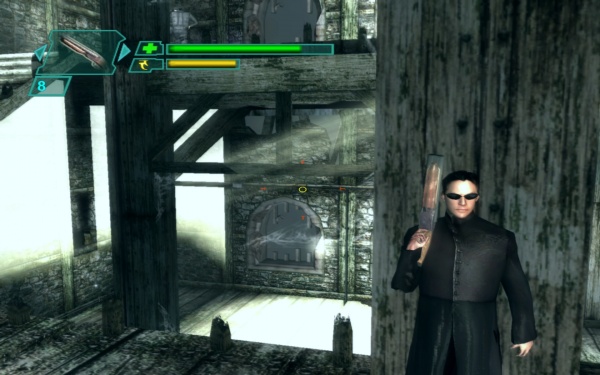 Neo takes cover with a sawed-off shotgun, inside an old church. This is another extended scene, that was not in any of the films. Note he seems unsure where the weapon's grip is actually located. 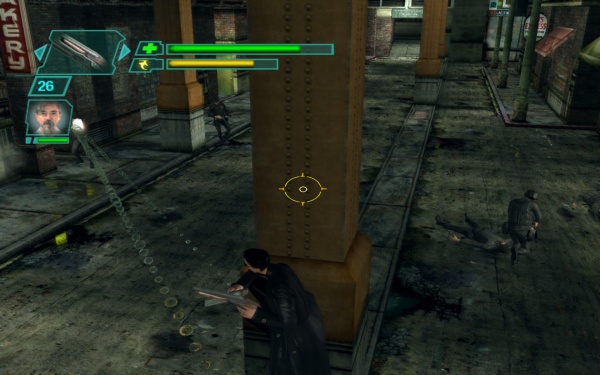 The Milkor MGL is used as the ultimate Agent-killer weapon. Used by Neo only. Called "Grenade Launcher". Usually is loaded with only 4 grenades when picked up. 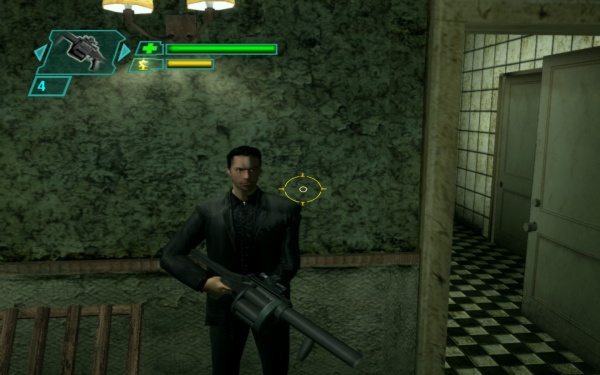 Neo holds a rather oversized Milkor MGL with a long barrel. Inside the Matrix, anything is possible...

Neo performs a "super jump" towards the camera, leaving the Agent for the flames. Neo is always armed with an MGL in this cut-scene, even if he didn't even use it in the actual level.

During a boss battle, a policeman is wielding an MGL. Strangely, he is identified as a "Sniper".

The M134 minigun is used by Neo when him and Trinity are in the helicopter rescuing Morpheus. Has infinite ammo, but can overheat. 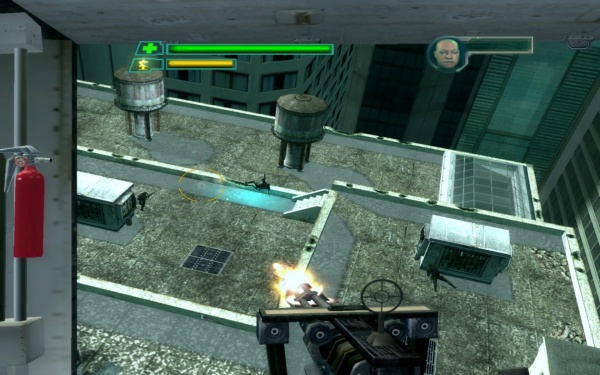 Before descending to Morpheus, Neo uses the M134 to clear a roof full of guards. This part was also left out of the film itself.

This image never gets old...

The M67 hand grenade is the resident fragmentation grenade of the game. Explodes on contact. Very effective against Agents or groups of enemies.

A guard throws a Frag grenade at Neo and Trinity during the lobby shootout level.

During a level when Neo tries to free the mind of a young girl, an armory is visible (but not accessible). Most of the guns are poorly drawn and cannot be made out. 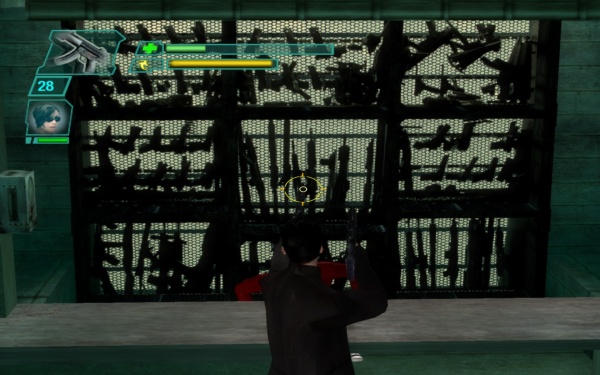 Neo observes the gun cache. Among the obvious weapons are a few MP5A3's (top right corner) and a Tommy Gun (lower left corner). There are also couple of USP's and what look like 92FS's.
Retrieved from "https://www.imfdb.org/index.php?title=Matrix:_Path_of_Neo,_The&oldid=1210493"
Categories: